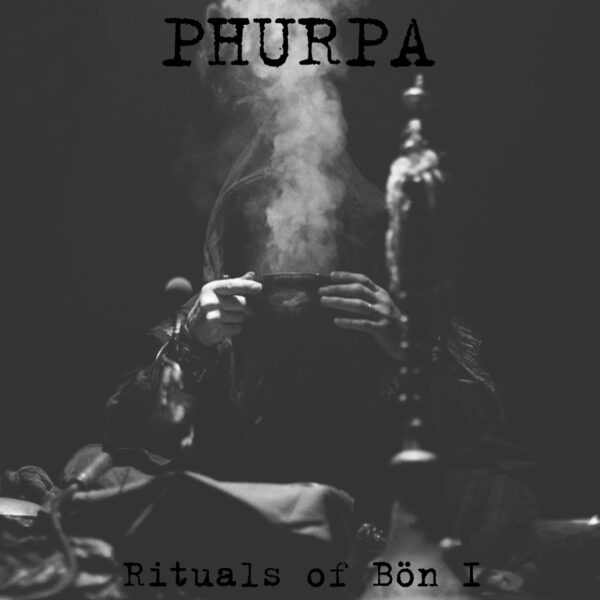 Led by Alexei Tegin, Phurpa are a group of Russian musicians/scholars whose first album arrived on the Invisible Hand imprint in 2007 and have, somewhat impressively, released a further 22 albums, at least 8 of which were also released in 2017. They take what they do very seriously; apparently spending as much time undertaking research as they do observing the musical ritual itself. One previous release, Gyud, came packaged with “special handmade incense”; going the extra mile to create just the right kind of environment for the listener.

“Over 40 minutes of shamanic trance…” the press release assures us. Recorded “…live in the underground 2013, Moscow…” although it could equally be taking place hundreds of years ago – my ears failed to recognise any modern instruments or technology – aside from vocal microphones and so forth – being used. Rituals Of Bön I is a great title; the fact that they researched a type of ancient religion with magical allusions whose name sounds like “bone” just adds to the mystique, at least to Western ears. Indeed, some of the instruments used in this performance are in fact made from human bone.

I have here a cd promo of a 12” vinyl release on Zoharum. I believe there is also a cassette version available which features four tracks; the two here on Rituals Of Bön I and two more pieces from another release named Rituals Of Bön II. The two pieces presented here are “yan-drub” and “long life”. “yan-drub” starts with chanting, bells, bone flutes, throat singing. It’s heavy. On first listen, this is a challenging start to proceedings, but as with anything worthwhile, any initial unfamiliarity or uncomfortable responses should be put aside in order to better become open to the work. “long life” involves clashing, clanging percussion, but has a more uniform – you could almost say soothing – approach. I have to say that it is not clear what these rituals are, outside of sitting down making music with traditional instruments. I gather Tegin and company enjoy tea fortified with brandy as part of the performance/experience, but apart from that… For perhaps we are not the main beneficiaries of the performance. It is the group themselves who aim for “transmogrification” by way of performing the music. Which is the whole point of the activity. We are simply witnessing them doing it, and that is all. Having said that, I think it does have the potential to appeal to far more people than just students of Tibetan anthropology or connoisseurs of Ritual Music. Phurpa are stressing the “shamanic” aspects of Bön for the sake of strong marketing probably, but Bön as a religion is still in existence; one way for the armchair anthropologist to tap into it is via podcasts (Bön casts, they call ‘em) at www.doortobon.org.