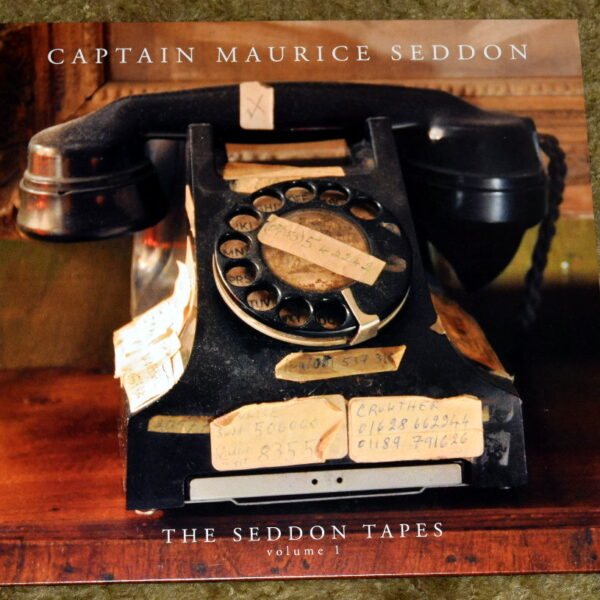 Happy to receive a copy of The Seddon Tapes Volume 1 (PARADIGM DISCS PD33), credited to Captain Maurice Seddon and released on Clive Graham’s Paradigm label as an LP. It’s a collection of phone conversations recorded on tape. The material here may already be familiar to you if you’ve ever tuned in to Resonance 104.4 FM (a radio station where I also happen to be a contributor), as excerpts from these tapes have frequently been played by William English on his show Wavelength. It was English who befriended Seddon and rescued the cassette tapes from the house when Seddon was eventually turned out of Datchet Cottage. Apparently there were “hundreds” of these cassette tapes – Seddon used to record all of his phone calls and kept the tapes. English interviewed Seddon on the air at one point to reflect on some of these conversations from his past, and I believe that Resonance FM were so taken with the material that there was an entire day dedicated to broadcasting the Seddon tapes.

If you’ve never heard these recordings, many are still available in the form of podcasts and Mixcloud resources, but here’s your chance to own a “golden treasury” featuring some of the more memorable and unusual Seddon moments, captured in a well-curated and permanent form along with images and a full-colour printed booklet that puts it in the correct context. In these recordings, we hear both sides of a conversation as Seddon engages with friends, contacts, and various ordinary people in society as he attempts everything to selling a fridge to sorting out a dispute over his phone bill. 1 You may wonder what’s so compelling about material which, on the face of it, is incredibly trivial and banal. The answer is simple – it’s the force of Maurice Seddon’s personality. He’s from a generation of English people who believed in politeness and courtesy, but also in expressing themselves with precision and clarity. Seddon was clearly quite passionate about making sure he was understood; one of the pleasures (for me) in listening to this material is the lucidity of thought that rests behind every sentence, and his command of the English language. He won’t let a matter drop until the exact point he is trying to make is communicated, his choice of words rivals an old-school English grammar master, and he has a way of expressing himself which has to be heard to be appreciated – this LP could never exist as a printed book of words, you have to hear it.

What makes this even more interesting is how this force is applied to all matters in life, no matter how unimportant they may seem. 2 Evidence of this energy is exhibited in details like measurements, dimensions, and weights, something Seddon clearly understood well. Did I mention he had a military background and used to be in the Royal Engineers? He put his training to good use and for most of his life was an inventor, a tinkerer with gadgets and motors to rival Gyro Gearloose. Some of them were quite odd inventions, like his thermal heating devices (socks, gloves, underwear), but they were practical and they worked. It may come as no surprise to learn that his house and garden was cluttered with things, collections which to the untrained eye would have appeared like junk; if he’d been living in America no doubt the do-gooders would have forced him to appear on one of those awful TV shows about hoarders and shut-ins (I am prepared to believe Seddon was neither) and put him through the painful process of throwing everything away – “decluttering” is the euphemistic phrase they use – because it would be “good for him” in some way. We are fortunate that William English was the exact opposite of such a tidy-minded puritan, and could recognise buried treasure when he saw it, enabling him to effect the cassette rescue. To return to my original point, this attention to detail may account for why so many of these phone recordings are occupied with Seddon attempting to establish, through communication with a bored or uncomprehending listener on the other end, the exact measurements of a gasket, the terms of a contract, the itemisation of a phone bill. It’s one clue, perhaps, to the way that this singular man understood the world, sizing up its dimensions with a perceptive acuity that was a combination of tape measure, slide rule and compass. That’s just one aspect of the Seddon universe; further views and snapshots can be gleaned from the assortment of materials on this LP, where after a time it is evident that his friends, family, and indeed anyone who entered his orbit was affected quite profoundly by him. You hear people say things on these tapes which, I suspect, they wouldn’t normally say; somehow Seddon brings it out. Even the “normals” who run garages or work as receptionists may start out bland and polite, but in a matter of minutes when conversing with Seddon they are pulled into dealing with something for which they have no terms of reference. Hearing this kind of thing happen live on tape is little short of extraordinary, for me. I don’t know what it means, but there is a certain transformation taking place somewhere. You will also wonder, the more you hear of this material, whether some of it might be prank calls (people trying to take a rise out of Seddon; he would never make a prank call himself, I suspect). But that is part of the cumulative effect of these tapes; they tend to undermine our sense of what is normal, in a very good way, until even the most trivial thing in life can start to appear surreal, charged with mystical significance, almost poetic. Is it possible for one person’s personality to bring about this sort of change in the world? Perhaps it is, through the medium of the telephone and the tape recorder, both of them 20th century transformative devices that create all kinds of magical layers in terms of distortion and miscommunication, through dropouts and interference. Things which Williams Burroughs knew and understood quite well, I expect (Paradigm also released a Burroughs record recently in 2016).

Which brings me back to the curators of this release. Clive Graham has a long-standing interest in unusual or obscure records, in the medium of sound-poetry, and in outsider artists (or maybe just plain outsiders). These preoccupations are reflected in the radio show he did for Resonance FM called Sound Poets Exposed; and in releases on his label. The LP Beyond The Black Crack by Revd Dwight Frizzell certainly ticks a lot of those boxes, with the additional cachet of appearing on the Nurse With Wound list. Clive may also believe in the phenomenon of “telephone poetry”, if we can call it that; he once compiled an entire show for the radio of excerpted moments from LPs where a telephone call played a part, including a Mothers of Invention track (‘Telephone Conversation’, from We’re Only In It For The Money), ‘The Blimp’ by Captain Beefheart and the Magic Band, and even ‘Mystic Tune’ by Revd Fred Lane. It was a great stream of disembodied voices bringing us the truth of the ages, or a deliciously random collage. The Seddon Tapes Volume 1 seems to dovetail perfectly with all these preoccupations; it’s an exemplary Paradigm record. And while Seddon was not strictly speaking an “artist”, it might not be too far-fetched to put this telephone LP in a category that includes such sound poet heroes as Bob Cobbing or Henri Chopin. I feel sure that either, if they’d met Seddon, would have recognised a fellow enlightened soul.

As to William English, he is unequivocal; he believes Seddon was a “significant individual”, a life-changing force, and states outright “I feel privileged to have known him”. After reading the extensive booklet (well illustrated with photos) enclosed here, you’ll find it hard not to feel persuaded of that yourself; it’s a text which ends with an anecdote which makes a strong case for showing that Seddon had discovered the secret of happiness itself. 3 To learn more, you need only purchase this LP. For me, the only cavil is that two sides is not enough; should have been a four-CD set at least! We await Volume 2 with impatience…this, received January 2018.