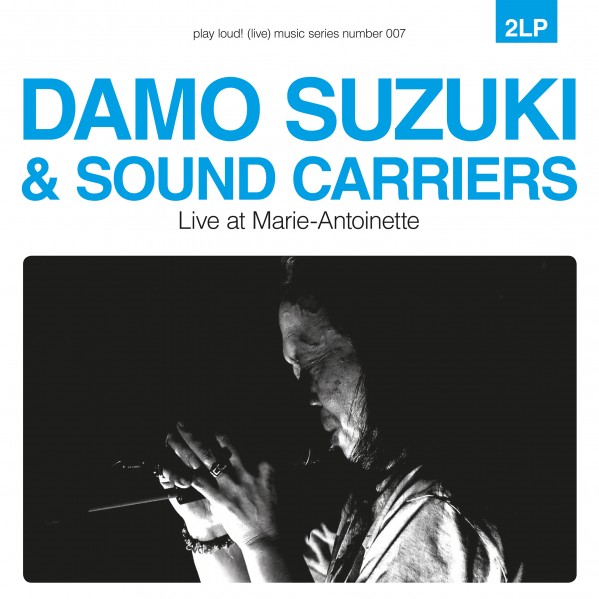 I’m sure by now, we’ve all become accustomed to Damo’s working regime during the post-Can years. I can see it now… fresh from the airport, we find our hero at a nearby travelodge, the suitcases unpacked, the obligatory coffee (or tea) is imbibed and then it’s on to the serious business of selecting/indoctrinating a number of local hepcats into all matters Suzukian (naturally it goes without saying that earlier volunteers to the cause like much missed craftsmen such as Messrs Karoli and Liebezeit never really needed hymn sheets or prompting from the wings). A series of gigs then follow, usually in lengthy, dilated-pupil improv mode and then selected recordings of these events are, more often than not, eccentrically distributed in limited edition runs. In some cases eccentrically priced too, as the P.R.O.M.I.S.E. seven c.d. bundle, for example, retailed at a eye-watering ninety-five notes!! Meanwhile, the hopefully cheaper (?) double vinyl set finds Mr. S fronting a five piece unit where members of Schneider TM, PanSonic, kpt michigan and Saal-C come against a wild card in the shape of one Tomoko Nakasoto, who’s credited with ‘dance and electric rake’; the latter, no doubt, on loan from Eugene Chadbourne, pioneer/inventor of the mutated garden tool.

It seemed to be a gig though, that was not without a certain amount of glitch and hiccupery along the way. Dirk Dresselhaus (elec. baritone guitarist) mentions in the accompanying promo lit that “…we didn’t plan or rehearse anything and were hardly able to hear each other on stage… kpt michigan’s guitar signal was changing levels for about +/- 30 dbs once in a while and was probably caused by a broken mic cable…” Though the sound gremlins clearly couldn’t be exorcised during the gig, it’s turned out to be a silk purse moment for all concerned as this epic set (all tracks clock in at over twenty-five minutes) still cuts the mustard. Back in the day, a lot was made of Can’s ‘group telepathy’ and the resultant ‘witchy surprisings’ (a phrase coined by Holger Czukay) and with the slate-grey cityscape and composite language blather of “Stern des Narren” and the Martin Rev-like primitive throb of “Die Leere Füllen”, I guess that a smidgeon or two of e.s.p. can still be transmitted by Suzuki-san to any nearby receptive vessels.