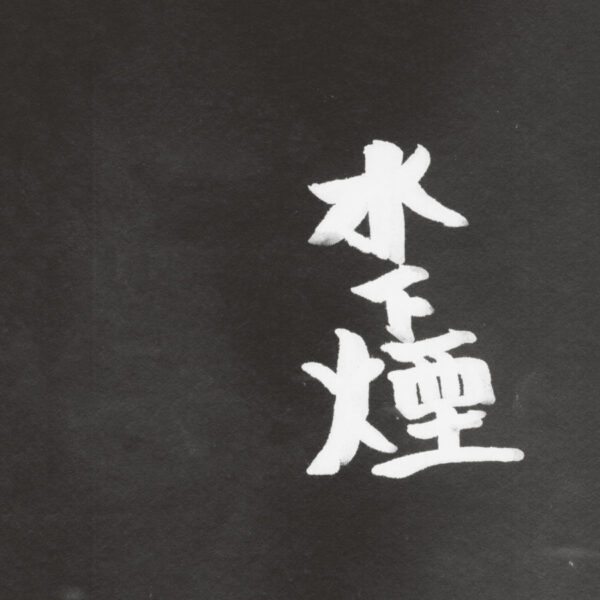 Ueno Takashi, Japanese musician, one half of Tenniscoats, and has also appeared sometimes with Maher Shalal Hash Baz; Ueno solo heard by us on his Sui-Gin record in 2008, Tenniscoats on their minimal Temporacha record in 2009, both on Room 40. Personally prefer Ueno making more straight-ahead psychedelic rock moves as part of the Melt trio, whose Pure Melt album we dug in 2015. Today we have Smoke Under The Water (ROOM 40 RM487) which is Ueno probably feeding his guitar through various effects until it resembles sequenced synthesiser music, in places. In other places it’s like nothing familiar, futuristic underwater harps from another planet or dissolving wind chimes that float away in the atmosphere or plastic harpsichords from 1960s Tokyo fetched back in a time machine. No denying Takashi’s fluent skill and technique, and on this record he plays so many notes per square inch that the listener certainly won’t feel short-changed. A little synthetic, but this lends it an air of “impossible music” which is part of the overall appeal. (20/10/2017) O3 is the trio of Ingar Zach, the Norwegian percussionist, with flautist Alessanda Rombola and the accordion player Esteban Algora. They haven’t made an actual “album” together in ten years, since debuting with …De Las Piedras for the Another Timbre label, the UK’s natural home for understated and restrained improvisation. In between times, the threesome have been occupied with work for the contemporary dance troupe Stella Polaris in Norway. Before us today, Trashumanica (SOFA MUSIC SOFA561), a slow and careful record made in a tiny remote village in the Valladolid region, the Hermitage of Nuestra Señora de La Anunciada. Hopefully far away from prying eyes, they communed with their conjoined inner spirits to produce these small but well-crafted sounds, these tiny notes, these subliminal purring drones, these microscopic rattlings. Breath, hand, and arm movements all magnified in service of art. I see Miguel Angel Tolosa did the technical work, from recording to mastering; on the strength of his Ephimeral record (for this same label), I would entrust this man as sacristan in any given Catholic rite. Music has quiet intensity; sometimes electrifying, often contemplative and deep. (20/10/2018) English guitarist dbh is Daniel Bridgwood-Hill. His album Mass (THREAD RECORDINGS THR005) is a delight. Tunes, melodies, skilfully played; uplifting and even somewhat spiritual in tone (though I doubt if he would thank me for saying that). He made some self-released albums about ten years ago; released Mood on this Manchester label in 2013; this LP, his second for them. He has connections with Kiran Leonard (Manchester, via Saddleworth), Irma Vep (also Manchester), and Julie Byrne (NYC). Have no hesitation in uttering dbh in same mouthful as C Joynes or Nick Jonah-Davis; dbh every bit as skilled as clearly he places great stock in guitar craft. Happy to note very little or no direct influence from American blues based forms, so would be plausible to situate him in John Renbourn lineage of Englishness. But in places this record also resembles best work of Daniel Fichelscher, Popol Vuh’s guitarist. Very endearing sleeve notes included within; makes note of the open tunings he uses; very concise too and no posturing or lengthy ego indulgence. This fellow seems very genuine and this is a record you can trust. (05/10/2017)