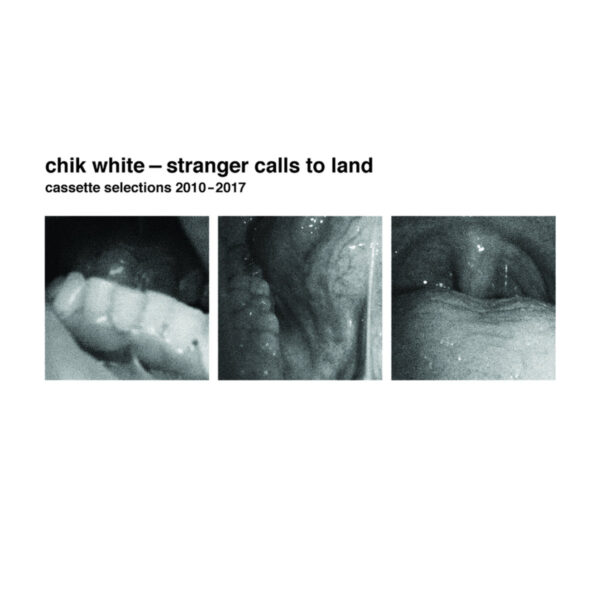 The lasting appeal of the chik white record Stranger Calls To Land (FEEDING TUBE RECORDS FTR363) is not immediately obvious to me – unless you’re a dedicated fan of the sound of the jaw harp. But I think I can see why this American label would find it so compelling and opt to compile this set of selections from Chik White’s home-produced cassettes. Chik White is actually Darcy Spindle, a punk/indie hero from Nova Scotia who ran a small label called Divorce since 1999, and organised an annual music festival in Halifax.

At some point in his career he started to experiment with playing the jaw harp; his most intriguing notion was to cruise down the Bay Of Fundy on a raft packed with small objects – bones, feathers, shells – and his own home-made instruments, including the jaw harp, and make recordings of himself. The raft itself was meant to be a musical instrument. It’s this aspect that aligns him to wildmen nature-boys like Jeph Jerman (who did it in the desert, playing shells, sticks, rocks, and cacti), and it’s what gives these recordings their rough charm. This refers to a cassette called Raft Recordings from Economy, put out by Notice Recordings in 2017. It’s almost the complete opposite to how a European musician would approach playing “objects”, an approach generally characterised by close-micing and some rather precious, overly-manicured results (except Adam Bohman, of course). This may be why the Feeding Tube team, Byron Coley in particular, senses the discovery of a true original – a rural version of some of the untutored eccentrics who ended up on ESP’-Disk, such as Mij or Cro-Magnon.

I should mention that these recordings also work for those who like “field recordings”, as a lot of rushing water and wind sounds also end up on the tape along with the jaw harp drone. And in case you think I’m making Chik White out to be a naive or outsider artist, the opposite is the case – he’s already done sophisticated experiments with “prepared” instruments, wrapping jaw’s harp with wire or adding magnets and metal object insertions; and has quickly evolved a species of performance art which involves actual bodily harm to Mr Spindle, in the form of bleeding lips and gums in front of unsettled audiences (a strategy which might liken him to Justice Yeldham and his panes of glass). Unusual record; you might first want to audition some of Chik White’s Bandcamp releases before investing in this vinyl treasury. From October 2017.