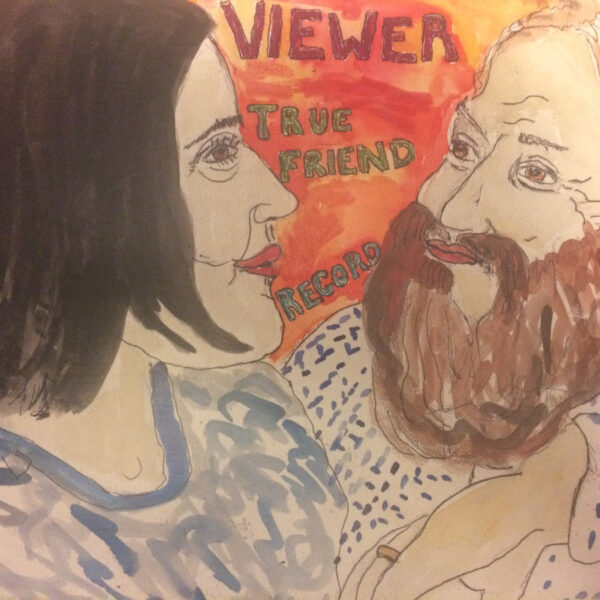 The American duo of Shannon Ketch and Beverley Ketch came our way on their 2011 LP Maps Of Our New Constellations, which evidently won me over with its unaffected charm. Same artistes are here now as Viewer, with True Friend Record (FEEDING TUBE RECORDS FTR334) which they describe as their “home recording project” and which Byron Coley endorses as “totally homegrown” while praising their status as “supporters of the Western Mass. sub-underground”, referring perhaps to the many items in the Feeding Tube catalogue which document the noise, songs, and weirdness that currently flourishes in Massachusetts.

The songs on True Friend Record apparently came from “Tarot poems”, and the watercolour paintings on the covers are likely to win a prize in the Henry Darger look-alike contest. There’s a strange beguiling charm…the vocals, slightly echoed sometimes, of singer Beverley making her half-spoken half-sung observations about life’s rich tapestry; the meandering nature of the melodies, which behave like pixies or dragonflies, seeing no need to stay in the same place for long; the unexpected episodes of electronic music that punctuate events, particularly the deep synth hums that seem to have no place on here at all; the banjo plucking that’s just the right side of competent, lending the album the air of a campfire singalong in a remote backwoods area.

Taken together, it’s like some sun-drenched dream of a rural America that never quite existed. At one time, us stupid critics might have reached for terms such as “acid folk” to help orient the listener with records like this, but now I’m not even sure that’s remotely applicable. But let the unfamiliar surface sound wear off, and we’ll soon find this is an all-American hand-crafted work, deeply felt and emotionally rich. The grain of Beverley’s slightly other-worldly voice is something to savour; is she witch or is she seer? Either way you can tell she doesn’t just do Tarot poems, but also Tarot readings, and can see inside your psyche as soon as you walk in the room. From October 2017.