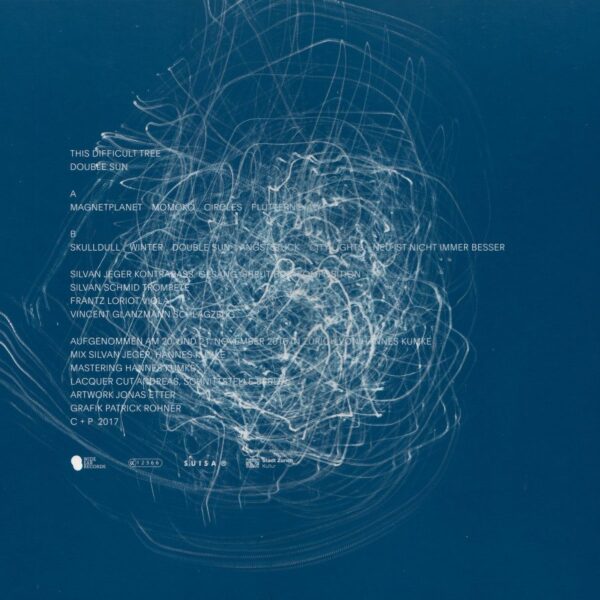 This Difficult Tree is a combo of European players led by Silvan Jeger, the Swiss bass player who also performs in Day & Taxi. Double Sun (WIDE EAR RECORDS WER031) is their debut album, and it’s a curious mix of elements – some bits of jazz, pop song, improvisation, loosely held together in a very contemporary framework of slow and deliberative playing. All acoustic; not a laptop in sight, which is to the album’s credit. Players are Silvan Schmid on trumpet, Frantz Loriot on viola, Vincent Glanzmann on drums and Jeger playing bass and singing, with occasional langourous drones from his shruti box.

French player Loriot is a personal fave in this milieu, and we greatly enjoyed his contributions in the Im Wald group; he’s perfect for This Difficult Tree, bringing just the right note of poignant longing with his sharp viola tones. Silvan Schmid less so; trumpet sounds like a fluffy saccharine marshmallow in its attempts to render true emotion, but its air of sentimentality seems to be part of what Jeger is grasping at. Glanzmann, heard by us on the impressive Sekhmet record in 2016, here sounds rather under-used, reduced to status of a cabaret drummer keeping time while the torchy singer swoons and poses. The combo are capable of producing some strong aural combinations when they get going, especially on the long piece ‘Magnetplanet’, where the pared-down mixture of instrumentation is just right.

I don’t care much for the songs, though. Jeger’s singing voice is hesitant, full of mannered pauses as he half-mumbles and half-sings his prosaic observations about life. ‘City Lights’ is just one example of the banality he’s capable of, the vocal equivalent of a picture postcard. I had much the same problem with Day & Taxi, which is the almost complete lack of swing feeling or passion in the playing and singing. For a more successful marriage of jazz and popular song, start with the Kew. Rhone. LP by John Greaves and Peter Blegvad. (12 October 2017)