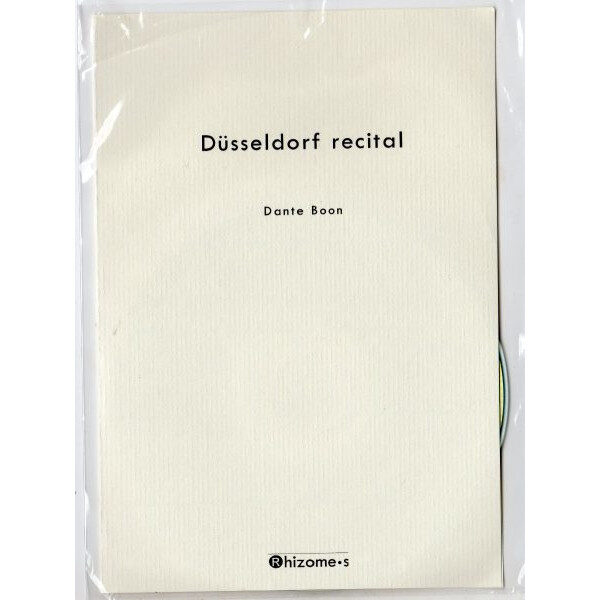 Here’s some more items from Pedro Chambel and his Rhizome.s label sent to us from Portugal. We last noted this label in December 2017 and found it quite a challenging experience to digest and understand these cool, distant, highly minimal musical statements, unaided by the “prop” of press releases and contextual information, and with very little printed data on the covers to help. But we love a good challenge. All the below from 20 November 2017.

Today’s first item is a piano record. The player of the piano is Dante Boon. It’s called Düsseldorf Recital (RHIZOME.S #21) and it was recorded by Bruno Duplant at the Jazz-Schmiede in Düsseldorf. Six compositions are tackled by this performer, and of the composers’ names the only ones I can say are remotely familiar are Eva-Maria Houben, associated with the Wandelweiser school; and Gil Sansón, who wrote the score to Balancing Act With Controlled Dynamics (winds measure recordings). The others are Coleman Zurkowski, Anastassis Philippakopoulos, Assaf Gidron, and Jack Callahan; most if not all of these also have Wandelweiser connections. The resulting recital is very much of a piece – not to say all the music is interchangeable, but there are shared / overlapping concerns between the composers, such as use of silence, very slow and precise performances, still/isolated notes hanging in the air, environmental sounds allowed to “intrude” on the listening experience, including occasional audience coughs and chair rustling. I’m beginning to perceive Wandelweiser as some kind of Herculean effort to create a super-John Cage entity, to create John Cage “squared” and see what the world makes of it. But it’s also to Dante Boon’s credit that he’s able to create this very convincing programme of music, making it appear like six academic papers presented at a symposium by highly knowledgeable researchers, all of them considering aspects of the same thing (or things). This isn’t to imply Boon is imposing his “technique” on the works, his personal style. Far from it; in fact I suspect this is the kind of music where conventional technique is the last thing that the composer requires.

I find that Boon is a Dutch pianist and a highly regarded interpreter of contemporary experimental music, and a composer in his own right, and also part of the Wandelweiser collective. So far this is much less daunting than the “barely-perceptible” releases we noted from the label last time, and the set contains many moments of musical pleasure (assuming that “pleasure” is the apt word when faced with such austerity and crystal purity); some of it I could even recommend to followers of Morton Feldman, with its dry patterns and delicate symmetries. I suppose the last piece, Callahan’s ‘Blue Dream Excerpt With Proportional Ending’ is the most difficult work here, with its yawning abysses of silence and tense moments of what’s-happening-now, which are used to section together some poignant musical phrases of dissonance and illogical progressions. Of the six, this one might be the “thesis” work, closest in spirit to demonstrating some of the tenets of Wandelweiser which remain rather opaque to me. 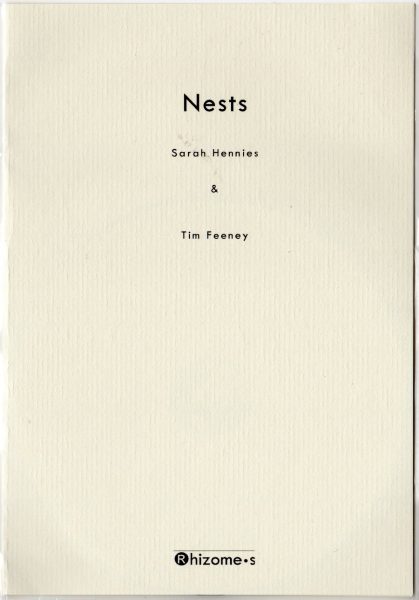 Sarah Hennies is an American composer, primarily associated with percussion music, though she did produce the guitar composition for Cristián Alvear (Orienting Response For Guitar) noted here by PKM. One feature of that slow and quiet piece was Hennies’ attempt to explore hidden percussive potential inside the body of that instrument. Hennies has also interpreted some of the 20th century “greats” of modernism, including Cage and Lucier, but has also performed pieces by some of the Wandelweisers (Radu Malfatti) and more recent minimalists, such as Ellen Fullman. She’s here today with Nests (RHIZOME.S #20), a joint piece realised with Tim Feeney, another American percussionist who has performed with Vic Rawlings, Dominic Lash, Howard Steltzer and others, and has at least one release on Another Timbre (the excellent crossover label that draws no lines between improvised and composed music).

I see that Nests was recorded at Silo City in Buffalo, New York. Never visited; apparently this complex of former grain silos is now a tourist attraction and there are guided tours of these “historic” buildings. Silo City has been reclaimed as a music venue, theatre and poetry space, and has been used for film locations. I mention this as it may account for the “natural echo” we hear on the recording of Nests. The content of the music is minimal – a series of plain percussive tones produced by means I know not, but there is a faint trace of “woodiness” in the dying fall of each echo suggesting it may have started life on a woodblock, marimba, or such like. But there I go looking for some sort of comfort zone, some point of familiarity in this very alien music. Over one hour, a network of “clops” starts to spin a spider’s web of sound across this vast imaginary space. Somewhere in the background is a chirping sound like grasshoppers or cicadas, which may be pure accident, or intended, or even produced by an electronic instruments. This is a piece of cryptical near-ceremonial performance on a grand scale, aural Black Magic, such that it’s almost baffling to the outsider; perhaps Hennies and Feeney went there at dead of night and performed it in total secrecy, with only an audience of crickets to witness the event (and even those insects had to sign a waiver afterwards). This is the only way I can account for its blankness, its refusal to engage with a potential audience; it really is sound for its own sake, insisting on its stony presence in the confines of a cold and uncaring world. 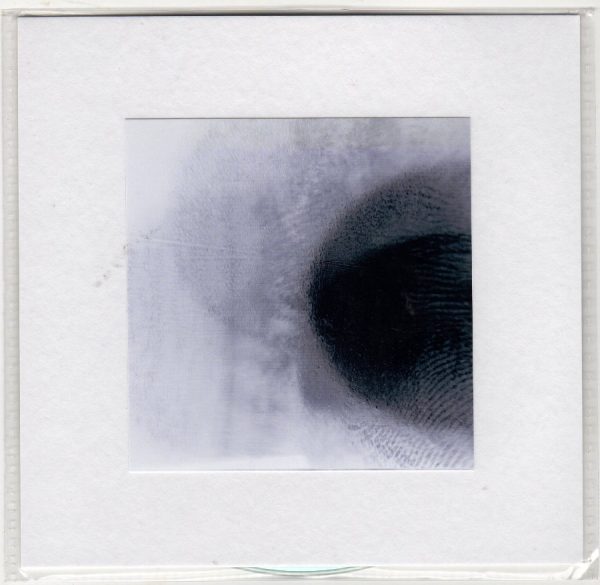 Other item in this envelope is a duo between Bruno Duplant and Pedro Chambel. These two are the co-founders of the Rhizome.s label and have made numerous recordings together. This one is a CDR made for Eter-Lab, a Spanish (I think) laboratory thing which acts as a focal point for experimental actions, recordings, installations, and ideas expressed in image, sound, and text. Their website is one of the most mysterious things I’ve seen in this context, refusing to explain things in much detail; its seven adherents, acting like a quasi-religious cult, deal in symbols, allusions, and obscure esoterica. When they allude to “invisible” releases you know you’ve entered the other side of the mirror and we as an audience are suddenly obliged to engage with metaphysical riddles and puzzles. This record, All We Have Learned And Then Forgotten is however much less impenetrable and minimal than the above records, and may even appeal to regular Sound Projector listeners who enjoy noise and drone experiments, for instance those of Basque player Miguel A. García. Duplant and Chambei made this continual 44-minute piece using an organ and electronics; a steady unwavering block of distorted drone is the resultant emission. With García, they might share an interest in intensity and severity; unlike him, they don’t feel the need to explore or develop or change the tone too much, and simply want to sustain it for as long as human endurance will permit, and then keep going beyond that point. Passing your mind over this gravelly terrain will indeed have the effect of erasing your memory, as the title seems to be implying; you can feel brain cells being corroded and corrupted as you are drawn deeper into this terrible vortex of inhuman force. Yet there’s a savage beauty to this power as well, which may be why you can’t break free from its magnetic pull.