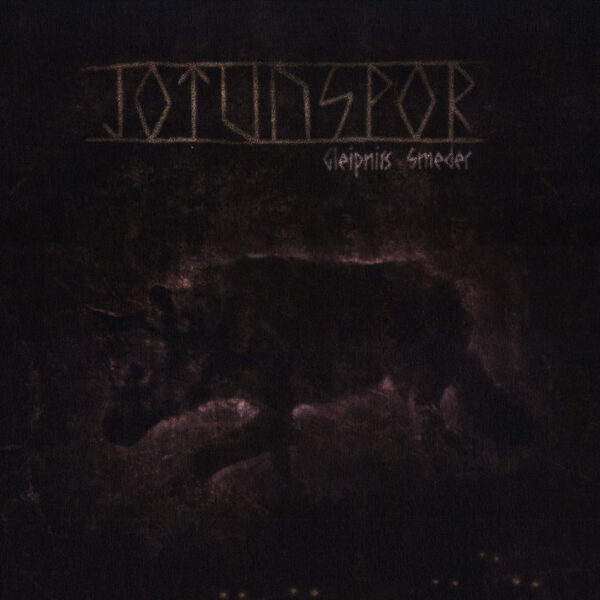 The Gleipners Smeder (COLD SPRING RECORDS CSR244CD) album is a Black Metal “classic” release from 2006, originally recorded by Jotunspor on request for the Satanas Rex label, a Black Metal sub-entity of Cold Spring Records. Here it be reissued for a second time (following its 2008 incarnation on vinyl, for Temple Of Darkness Records). The two Norwegian maniacs who made this release are not quite as “anonymous” as the majority of Black Metal acts, though they do have the usual string of aliases; bassist / guitarist Tom Visnes is also called King Ov Hell, and the multi-talented Einar Selvik is Kvitrafn. Both are former members of Gorgoroth, a prolific Norwegian BM act which started in the early 1990s and is well-respected for its Tolkien-influenced explorations of epic themes and dramatic darkness.

There’s also Einar Selvik’s Wardruna project which should be taken into account; we noted their Runaljod – Ragnarok album in 2017, and its preoccupation with ancient Nordic topics has seeped well into the grooves of Gleipners Smeder. “The concept…is strongly founded in the old Norse cults and beliefs”, the press note informs us, while taking us on a whistle-stop tour through some highlights of Norse creation myths (hello, Ragnarok) and reminding us that the lyrics here are sung in old Norse as well as modern Norwegian. What mostly comes over on today’s spin is an epic, near-heroic sense of drama and moment, every track overloaded with incident in the guitars, drumming, and singing, performances which have passed beyond merely “frantic” into some new unexplored realm of urgency. Only the second track, ‘Svartalvheims Djup’, offers some relief from this intensity, but it’s still a gloomy exploration of a frozen waste, whose mountain slopes are evidently inhabited by unpleasant creatures we don’t wish to encounter.

Kvitrafn’s production skills are exceptional, bringing depth and detail to every waking moment of the album; it’s very far from being a basic BM thrash of nasty guitars, in spite of Jotunspor’s evident commitment to the “grim and primitive” schools of Black Metal. There’s a lot of attention paid to processing, judicious use of effects, stacked vocals, even sound effects; the album tells a story, and the story-tellers stick to the theme with tenacity and conviction, bordering on the fanatical. From 23 November 2017.