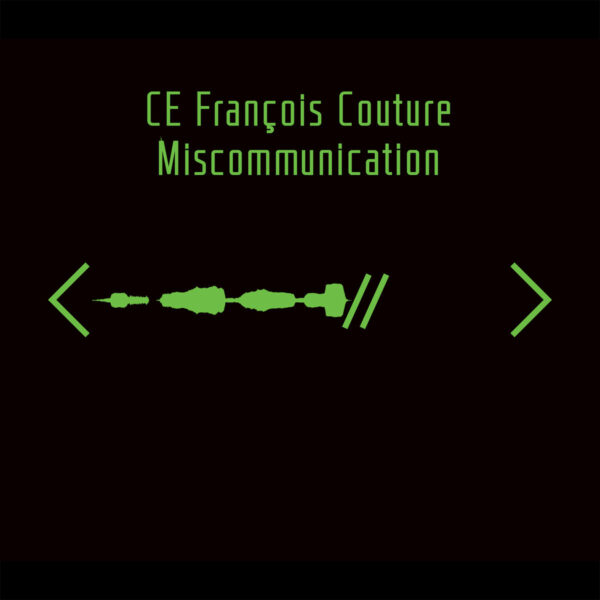 Another record from Quebec composer CE François Couture following his Spam Me album which we heard in 2017. That item indicated François’s preoccupation (bordering on mania, which is the best way) with the theme of failure in communication, an affliction which has undoubtedly weighed upon mankind ever since we could read, write and speak and even before that, but one manifestation of it is the spam email, a word-jumble epidemic of aggressive proportions that has convinced our Quebecois friend that the entire world (or the world wide web, at any rate) has become a gigantic Tower of Babel. This despairing continues on today’s offering, Miscommunication (CUCHABATA RECORDS CUCH-117). The album comprises five not-unrelated tracks, often made with collaborators, each one exploring a different aspect of the imaginative ways in which we humans manage to hijack, divert and exploit “meaning” through the art of miscommunication.

Politics is one obvious target, is it not? None of us has managed to sit through the utterances of any minister or political pundit on the telly without writhing in agony in the face of their self-evident lies, hypocrisy, deceptions, and underhanded attempts to manipulate our minds with their slippery mouths. CE François Couture has a shot at zapping this bug on ‘E Pluribus Unum’ with the help of poet Thomas East. Sarcastic “patriotic” jaunty music is fed through electronic glorp while East’s words express 100 years of American whitewashing, in choice soundbites. What’s at stake here is democracy itself; how language is being diverted to “hijack the will of the population”. East resurfaces on ‘Birds and Bees and Bears’, where the idea is that families and relations can’t understand each other, especially not on thorny subjects like love, sex and our own origins; children only want to learn some truth; parents can’t help them. This confusion is conveyed by means of a rambling word-salad spoken through various echo effects, while Couture’s equally discursive music suggests disconnected chains of thought by means of rootless, chordless synth music and weird edits. I thought I understood the target of this piece, but felt even less certain when I got to the end of the track. Must’ve been effective.

With ‘Chant Song’, I sense we’re on slightly more conventional ground – if symbolist poetry can be considered conventional. A poem by Jacques Prévert, French hero often associated with the Surrealists, is rendered as a sung piece not unlike a modernist version of a Gesualdo madrigal, with Couture overdubbing all the required voice parts with considerable gusto and skill. For some reason I think this might appeal to Alessandro Bosetti; it seems to overlap with themes and thots not far apart from his own baroque oeuvre. The 11-minute ‘Aphasia’ suite might be the most fully-realised treatment of Miscommunication’s central theme; and in construction it’s not unlike Spam Me in its reworking of “found” materials. A man suffering from aphasia – a known condition which severely affects one’s ability to speak, and hence to communicate – gave some answers to a polling researcher once, and his responses were recorded. Couture found the text on the internet and has repurposed it as song lyrics. These are sung over tautly-constructed instrumental passages, for multitracked pianos, guitars and drums, creating disjunctive art music songs in places reminding me uncannily of Art Bears or Henry Cow, or even music in the Zeuhl genre. The listener’s mind will be cunningly short-circuited as they try to make sense of the lyrical content, which tends to sabotage common sense; since it’s sung with conviction and finely-judged mock-solemnity, this only makes the total effect more delicious. Couture’s piano becomes a typewriter, meticulously transcribing an unintelligible text into modern classical music form.

We end on another political note with ‘Not Him’, another team-up with Thomas East, a gloomy statement which is aimed squarely at the flat unyielding brow of President Donald Trump. The music is all forlorn scraping and lonely, isolated tones; the vocal recit carries the emotions of a man aghast, barely daring to whisper, staggering about in disbelief. This exasperated narrator evidently goes through most of the “five stages of grief” in the course of these 11 painful minutes, by which I mean there’s plenty of denial and anger, but without ever reaching “acceptance”. A strong piece, and although not directly connected to the central theme of Miscommunication I am sure that well-informed listeners can join the dots between this track and the track that opens the album. Another curious and imaginative record, worthy of investigation. From 6th December 2018.