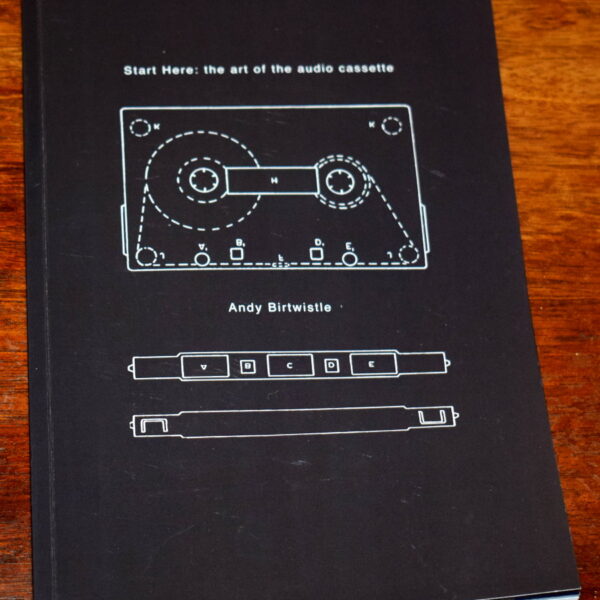 Got a bundle of cassette tapes from Andy Birtwistle, who occupies an academic station – he’s reader in Film and Sound at Canterbury Christ Church University, and is also a sound artist and film-maker. The seven tapes are related, released under the collective heading Start Here: the art of the audio cassette. Birtwistle is making a series of conceptual sound-art statements, using the cassette tape, but also commenting on the format of the cassette itself. The series is packaged along with a glossy full-colour A5 booklet, with detailed explanatory notes and pictures. I found the entire collection dry and unengaging, with only a few moments of respite, but let’s try and understand the creator’s intentions.

Birtwistle is preoccupied with various aspects of sound recording as reflected on cassette tapes, and with the mechanics of the compact cassette tape format itself. I think he wants to call attention to these things, perhaps to remind us of the layers of illusion that are involved in this medium and to lay bare the operations by which it’s done. In this respect, perhaps he’s not unlike the Structuralist-Materialist film-makers of the UK, operating in the later 1960s and early 1970s, who called attention to the operations of film production and projection in a highly conspicuous manner. But they had high ambitions, linking the actions of deconstruction and demystification to a coherent (if contentious) political agenda, and a critique of mainstream narrative cinema. These are not part of Birtwistle’s plan. Tape No. 1 Salute To Vinyl is merely surface noise and crackle from a “blank” vinyl LP; boring, worthless process noise of zero audio interest, but to Birtwistle it represents the “sound of vinyl, brought to you through the medium of magnetic tape”, and an opportunity to speculate on the meanings of “reality”. He feels entitled to make this claim because the tape we’re hearing is one step removed from the “reality” of the record. The vinyl theme continues on Tape No. 4, Needle Drops and Run-out Groves. 48 records are faithfully catalogued in the booklet; we don’t hear a note of music from any of them, since Birtwistle’s intention here is to present the different run-out grooves from these 48 discs. So far, very little audio content of value; and the conceptual points made are not very deep. Things get even more reflexive with No. 3, Audio Cassette Tape. This is a meditation on the physicality of the format itself; the point is made by a lengthy verbatim quote from a printed US standard, calling attention thereby to such minutiae as the construction of the shell, the positions of the components, the sides of the tapes. On the tape itself is the voice of an actress reading out the words “Audio cassette side A” repeatedly, in between long silences. This is art as description; it’s like a conceptual oil painting that lists the parts of its own making (canvas, frame, stretcher) in lieu of saying anything. It takes two entire C40 tapes to make this supremely unimportant statement, leaving us none the wiser about anything. Two of the tapes are “straight” field recordings. At least with these, there is some audio content and not just a conceptual point being made, even if the recordings themselves are banal and commonplace. No. 2, The International Refuse Collection is the sound of garbage trucks on the streets emptying our bins, while No. 7 Level Crossings has been sourced from railway junctions. The garbage truck tapes come from Taiwan and Canterbury, the latter recording connecting to the Level Crossings tape obliquely, when we hear a “metallic grating noise” from the lorry as it approaches the rail station. But both of these releases adhere to the central theme; the bin collection one asserts that most cassette tapes ended up as landfill, while Level Crossings is intended as a metaphor for recording levels and some gentle musings about the nature of distortion and playback. Since Birtwistle has so far exhibited little skill in the craft of microphone placement, this last claim is a bit rich. Tape No. 5 is called Chewed, this time showcasing what happens to a cassette tape when it gets mangled by a cassette player. The creator’s note lingers over the details of the process (he calls it “a tendency towards self-destruction”) with almost pornographic relish. This one does at least succeed as an engaging piece of unpleasant squealing noise, so may appeal to lovers of noise music; but many other creators have gone farther, and produced more exciting results, with similar actions. For instance, I need hardly list all the great artists (Marclay, Otomo, erikM) who have wrought havoc with their attacks on turntables and vinyl, and generated 1000 times the excitement of Chewed. But he’s no performer; Birtwistle’s intention here is to present us with “a sounding of the materiality of the compact audio cassette and the mechanics of cassette tape playback”. He makes it sound like a sterile laboratory experiment. Only Tape No. 6 held any real lasting interest for this listener. Music is Killing Home Taping contains a jumble of found tapes, home audio recordings – ordinary people singing, talking, making recordings off the telly. Where the other items contain reams of annotation, the materials here are left uncatalogued; a fascinating jumble. Not a spectacularly new idea; Mark Vernon for one has been doing this for years, collecting and curating found tapes with a comprehensive determination from Tape Clubs and car boot sales, and has published his results with much more imagination and spirit than the lifeless, disorganised assemblage here. Birtwistle’s plan is bolstered by the brief essay in the booklet which gives a potted history of the rise of the domestic use of the cassette tape (something Felix Kubin has already done with much more accuracy and zeal), and appears to be making some point about the notorious “home taping is killing music, and it’s illegal” campaign launched by the BPI in the 1980s. Remaining apolitical and equivocal, Birtwistle declines to debate the ethics of the BPI’s plan (they wanted to impose a punishment tax on sales of home cassettes, to recoup money from their perceived losses of album sales); another lost opportunity to say something. Throughout this series, Andy Birtwistle exhibits no interest whatsoever in transforming his sounds; the classic musique concrète / electroacoustic method is not for him. While this results in very thin and unengaging results for the ear, I do at least have to admit that what ends up on these tapes has a certain documentary truth, an unvarnished physical reality. But neither is there any sublimation, no artistic transformation. I wish he’d do more than simply describe these truths in pedantic detail; I’d like to hear more about what he thinks they mean, and why he supposes they’re important. Both the tapes, and the prose in the booklet, suggest they are presenting subjects whose value and significance is self-evident. Far from it; he needs to work harder to convince us, to make his case. From 10 November 2017.