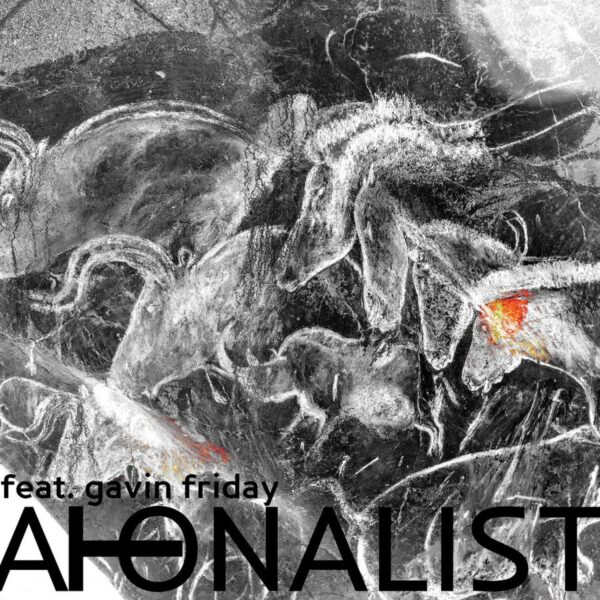 As droned on about before, travels in reviewland can occasionally result in stumbling upon long term a.w.o.l. musicians who, aided by trapdoor and flash powder trickery can come crashing into the here and now as if their lengthy absence was but a momentary daydream. A brisk ‘tah daah’ emerges from the orchestra pit as we say hello (again) to Gavin Friday: Lord Creator of the mythical Lypton Village and co-vocalist of those “horrifying, disgusting, deeply offensive” Irish post-punks The Virgin Prunes. For my sins, losing track of him after his brief solo tenure at Island Records, post veep split. Since then, by answering the calls of The Fall, Coil, Jah Wobble, Howie B. (?) and The (Talking) Heads, a mixed bag of film soundtracking/collaborations have punctuated his live long days. Demonstrating then a definite ability to successfully wrap those Brechtian/glam-shaded tonsils around a succession of disparate projects. Attaching himself to the French duo Atonalist though, is a marginally different kettle du poisson, comparison-wise, as band members Gabriel Pion (John Cale, Arto Lindsay/Hector Zazou sideman) and fellow multi-instrumentalist Arnauld Fournier (Hint/La Phaze/Dead Hippies…) seem to share more than a touch of the sponge mentality, soaking up elements of industrial, ethnic, ambient, noise and free jazz elements along the way. But it’s really genre number one that has, in the main, reduced all those other stylistic devices to bit-player status.

Glum-faced bass clarinets and those familiar jackhammer beats of old on instrumental cuts like “Behaviourist” and “Realistic Answer” point towards the (early) Swans skin-pounder Roli Mosimann dishing it out with Clock DVA at their most obtuse, or those Swiss nutters 16-17 and their equally hyperactive spawn Ix-Ex Splue. As for Gav-related material, check out the sedate drawing-room piano and breathy sax ‘n’vocal insinuations of “Different to the Others” and the desperate, psycho-dramatics of “The Road to Perdition”, with its “…this love is wrecking me…” pay-off. Meanwhile any number that pays due respect to pataphysician Alfred Jarry simply can’t fail to rein me in. “Our Fearless Leader”s opening line of “By my Green Candle!!” being a favourite oath of Jarry’s most famous creation, the grotesque Pere Ubu. Though regrettably, any bellowed exclamations of “Hornstrumpot!!!” and “Pschitt!!!” fail to materialise on that particular song sheet.

Those slurs on the Prunes’ character in the opening para really need an explanation before I close. It’s a quote from one of the ‘red tops’, late 1982, putting the boot into a televised Prunes gig at the Brixton Ace Cinema. The V.P.’s simulated sex scenes were reported to moral guardian Mary Whitehouse by a cleric and a headmaster in the audience (!!). She was wrongly informed that the oral sex/simulated intercourse was performed in front of an audience of twelve to fourteen year olds, then screened nationwide. A huge moral panic (a la Grundy/Pistols) was kicked into touch when it emerged that Channel 4 cut the offending incident(s) from the final programme before it was aired. And even more obviously, having a bar licence meant that the Brixton Ace had operated a strict over-eighteens policy ever since it opened. Collapse of stout party.