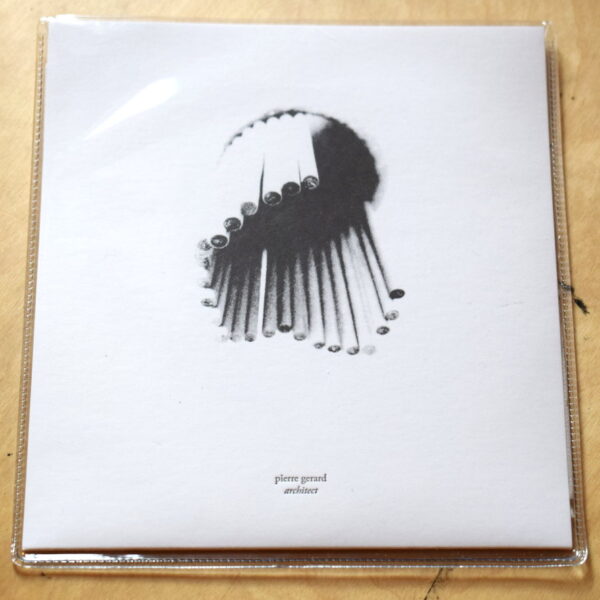 Through the label of Pedro Chambel, we heard the music of Belgian composer Pierre Gerard on a split record Études released with Bruno Duplant. Consequently Gerard himself sent us a package, which landed here 17th January 2018. The CD architect (senufo editions # fifty) is packaged in a very attractive letterpress cover. All the white space and small fonts (in lower-case natch) tip you off to highly minimal contents. Cover image baffles. For some reason I thought it was a modernist light fitting hanging from a white ceiling. Now I think it might be some untipped cigarettes in a dispenser. This might be the reward for the listener, even if they do not smoke.

The three parts of architect are distinguished by unusual glyphs or symbols, which precede the subtitles; part one is ‘the mechanics’, part two is ‘the structure of a rock on a high mountain’, a situation which reminded me of the title of the last one we heard, ‘L’innocence a la verticale (sur la falaise)’. I was daunted by the possibility that “we have to climb a sheer rock face, like mountaineers, in order to understand or experience this music”. Today though not only is the music more approachable for some reason, but evidently Gerard’s concern is a more general one to do with space itself. The third part of architect is ‘the distance between the elements in a small forest area’. The whole work is intended as “studies on what surrounds us”, indicating an interest in the environment, “and which remains sometimes invisible”, indicating the metaphysical side to Gerard’s work. To navigate this space, Gerard’s plan on ‘the mechanics’ is to propose a 20-minute block of total silence, whose serene beauty is only occasionally interrupted by tiny fragments of sound, fragments which might have some basis in music. Low hums, creaks, imperceptible drones. We’re in the presence of a church organ played by the world’s most diffident and philosophical organist, who only communicates the melody of the hymn to us with two or three understated notes at a time. The congregation can do the rest.

‘the structure of a rock on a high mountain’ continues this theme, though with recognisably different elements. Fluttering as of butterfly wings, plucking strings, strange unidentifiable rustling. The occasional sharp cut-off effect which surfaces now and again reminds me that Pierre Gerard works in small samples of sound, which he assembles with great deliberation, releasing small microscopic atoms of compressed information into the ether. We need to have a long memory to “read” this music, assuming that is we are intended to put the fragments together. Maybe the intention is to show how everything in life is unknowable, occluded, mysterious in origin. At all events this “mountain” suite certainly delivers more in the way of incident and substance than part one.

Lastly, ten minutes of ‘the distance between the elements in a small forest area’. Near the start I heard a few precious moments of drone music that was simply beautiful – sounded like a plucked cello string along with a harmonium. But it vanishes almost instantly. I could happily have enjoyed a whole album of music like that, but Gerard’s plan is much more severe. Wait patiently and the next snippet of data may pass before us like a passing train (a very small train) in the middle of the night.

As a philosophical contemplation of invisible things which surround us, this record invites the mind to speculate about it is that we might be missing as we go about our hum-drum lives, presumably rushing about too quickly to see anything and making too much noise to observe the real presence of these invisible things. They’re not supernatural beings at all, according to Gerard (I would guess); the fact he might see himself as an “architect” of this unseen space means that to him they are real, present, every bit as tangible as a concrete blockhouse or an elevated ring-road. All he has to do is reveal them. Perhaps compositions like this represent his attempts to create blueprints for our surroundings.