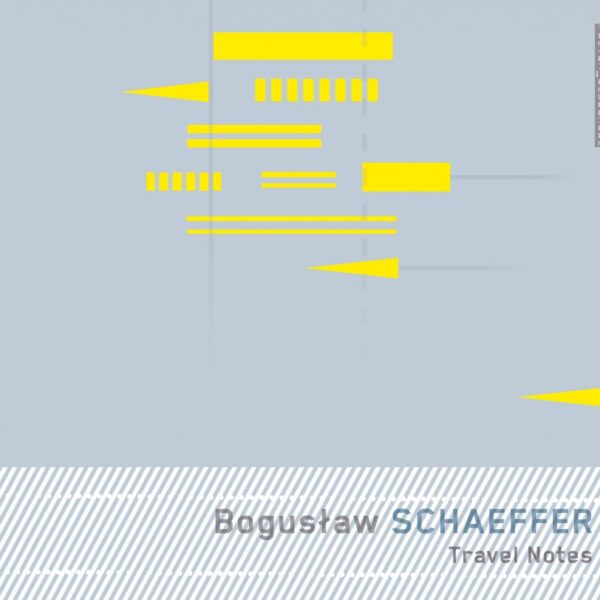 Bôlt Records in Poland continue their mission to bring us neglected chapters in the history of Polish electronic music, this time once again showcasing the work of composer Boguslaw Schaeffer (last given the deluxe 2-CD treatment on Assemblage, released in 2012). Today’s release Travel Notes (BR 1042) contains five works dating from 1973 to 1979, realised by many diverse methods – electronic synthesis, computers, tape. Players and fellow musicians Paul Pignon, Bohdan Mazurek and Folkmar Hein are credited with the “realisation” of these works, some of which relied on graphic scores, and they emerged from such centres of avant-garde endeavour as Radio Belgrade, the Polish Radio Experimental Studio, the Cracow Electroacoustic Music Studio, and the electronic studio at Technische Universitat in Berlin. Historically interesting, but aesthetically rather thin; I struggle to find meaning or substance in any of these works, and even the booklet of notes does nothing but describe, in some detail, the technical aspects of each composition and the machines / equipment that were used to realise them. This appears to be Boguslaw Schaeffer’s point: “Music does not communicate any content. Apart from itself,” he is quoted as saying, “That is music talks about music, not, God forbid, about the composer’s feelings about which we should not be curious”. This may account for why all of these pieces seem so abstract, dry, lifeless, and cold. (03/01/2018)

There’s more life and warmth to be found in Musiquette: Improvisations on Górecki (BR 1045), which is a lively set of unusual instrumentals performed by Evan Ziporyn, Adrien Lambinet, Mikolaj Palosz, Kuba Sokolowski and Kamil Szuszkiewicz. They went into the Polish Radio studios in September 2017 to record these five pieces of improvised music, all of them “freely inspired” by two compositions of Górecki. The American player Evan Ziporyn (co-founder of the Bang On A Can All Stars) seems to be the main man behind this idea – credited here as “artistic director”, he lays out his ideas in the enclosed booklet; he seems to have had a personal epiphany when he first heard the music of Górecki in 1993, was impressed by the composer’s “willingness to embrace extremes of sound and emotion”, and evidently wanted to pay homage in these improvisations.

What we hear is a small chamber ensemble creating all acoustic music on traditional instruments – clarinets, trombone, cello, piano, and trumpet, whose individual voices are caused to shine in these very open-ended arrangements. To put it another way, every note stands out, every single instrument recognisable in sharp distinction to the others. This may reflect the “starkness” and “precise structures” that Ziporyn hears in Górecki’s music, and wishes to reflect back at us through these improvised works. But it makes for a highly effective combined sound. If so, I think this works best on the 21-minute ‘Old Gold’, which has a certain continuity of thought, allowing the listener to see coherent shapes; ‘Musiquette’ by contrast is too bitty for me, with its wild stop-start dynamics perhaps trying to shock or startle the listener with its over-emphasised “modernity”. There’s also ‘Parliament’, which seems to be guided by an “everyone-play-at-once” rule; the resulting polyphony is something which they just about manage to pull off, but at this point I found myself growing a little weary of Ziporyn’s blues-based and jazz-inflected riffs (an avant-garde Benny Goodman), which while rich and flavoursome are also slightly corny. The Polish players however all acquit themselves with honour on this account, playing with what I would regard as the correct degree of ascetic severity. (03/01/2018)