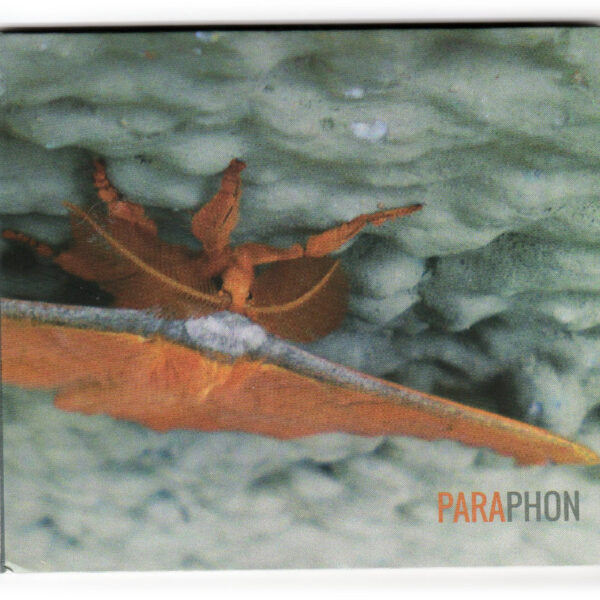 Fine Euro-improv trio Para are here with their new item Paraphon (FREIFELD TONTRÄGER #025) (every album they release must incorporate their name in some way; too bad they weren’t around to appear on Eugene Chadbourne’s Parachute label); this one captured live at Kaleidophon jazz festival in Austria; members from Greece and Austria; stark and sombre acoustic playing is their forte. Stuart Marshall heard their para-ligo record from 2012 and praised “textural delicacy…weight of its silences…many a judiciously skeletal performance”. Skeletal is one key word operative today also; often we use this bon mot as shorthand for music that’s compressed, with much dynamic silence; when we wish to imply sounds that are as brittle as bones; but in this instance we are hearing the bare bones of music, what’s left after the corpse of free improvisation has been picked to the bones by the vultures.

This pessimistic view sees all of music as a sprawling garbage pile produced by the unfettered reign of greed and excess, with special areas reserved for old DVDs and BluRays (this trope comes from a Simpsons cartoon). Para excel in this sort of sketched-in, slightly provisional limning of what they see around them, landscape artists with only two colours on their palette, blocking in horizon lines where they may in this uncertain zone that surrounds us. Instrumentation is French horn, voice, piano, and double bass; played in taut constrictive fashion, squeezing out music that barely breathes, creaks, and takes tiptoe steps across a minefield. It would be convenient to suggest that Para work themselves into a trance with their subdued patterns, but they don’t really; in fact they dare not sleep for one second; the enemy is lurking in the darkness; wide-awake and alert is the watchword, the code by which all improvising soldiers must live if our threatened breed is to stand a chance of survival.

The cut that’s really hitting home on today’s spin is ‘Ifestio’, a post-modern prayer to the Gods, where every breath of hope is undercut by the creeping menace of a slowly advancing entity (it might be a large black spider, or a metal android of death…) Heroes of the vanguard are Elena Kakliagou, Ingrid Schmoliner, and Thomas Stempkowski. Elena and Ingrid also realised the excellent Nabelóse record for Corvo in 2017, noted here. Very good. From 19th January 2018.