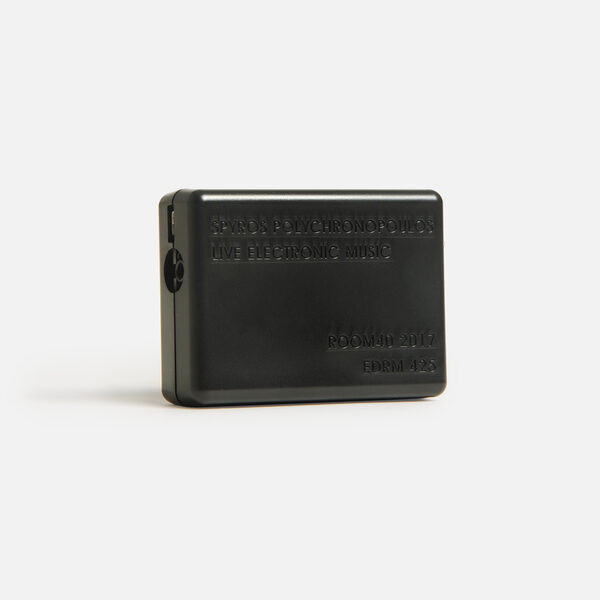 Here’s an unusual item from Room 40. Live Electronic Music (EDRM425) only exists as an “artist’s multiple”, which means that if you make a purchase then what you get is “a bespoke hand-crafted polycarbonate box”, which makes a noise. More precisely, every time you switch it on you will get a unique playback of the compositional work of Spyros Polychronopoulos, each one different from the preceding playback. This has been achieved by iterative software, playing back samples stored on five audio channels and selected at random by a database. I don’t have one of these boxes in my possession; instead I have a promotional CDR sent to me by the distributor, which contains 22 mins and 20 seconds of electronic music, which may or may not provide an instance of what you get from the magic box.

Spyros Polychronopoulos once made a record called Electronic Music in 2014, noted by Stuart Marshall; “a perpetual, inbuilt instability and wilfully choppy sequencing” were the hallmarks of that work, and there was little time wasted on needless repetition. Maybe the need for continual productivity has stimulated his need to build this infinite musical box process. Spyros has collaborated with Antonis Anissegos and with Lionel Marchetti, but the genesis of today’s release comes from performances he did with his mate Fotis Kontomichos. It seems they both came to the conclusion that most electronic music nowadays is little more than samples and software, a sophisticated form of playback of pre-recorded elements. So it occurred to Sypros that the artist (or composer) didn’t really have to be present for the performance of the work. This led to the development of the box and Live Electronic Music, a device pre-loaded with parameters and rules that would allow for a certain amount of variation in the playback.

Is the composer necessary? Can that station be occupied instead by a system, such as generative software, loaded with rules? These notions aren’t especially new or innovative, though I don’t suppose Sypros makes claims to be seen as a ground-breaking revolutionary. I am reminded of a couple of things from my memory of concerts I have attended. One of them was seeing Rehberg and Fennesz (and one other) on stage with their laptops at a time (c. 2001?) when this sort of thing was quite new and bold; some of us in the audience were struck by how impassive the players seemed as their stern faces were lit up by the glow of the laptop screen, and wondered (a) what they were doing to earn their appearance fee and (b) if they even needed to be on stage at all. As the laptop became ubiquitous in music, this drama and its attendant questions has been repeated and re-enacted a thousand and one times on stages across Europe since then, and we still haven’t got any answers, although perhaps Spyros’s box will prove to be a useful piece in the jigsaw puzzle.

The second occasion was seeing Stockhausen giving a playback of Hymnen over the venue’s PA system, I think at the Barbican. Hymnen is a tape / electro acoustic work and couldn’t ever be played live by musicians. The point of seeing it on this occasion was that Stockhausen himself was at the venue in person, he introduced it and spoke about it, he probably supervised the live mix by climbing into the control room, and more to the point lent his personal master copy of the tape for the playback. This latter aspect was a bit like when I saw Kubrick’s master print of 2001 at the NFT; the organisers made a point of telling us this. It seems to be a hallmark of quality / authenticity if we’re granted access to the artist’s own copy. Maybe it brings us closer to the creator in some way. Unlike the Rehberg / Fennesz thing, the Stockhausen event seemed to be reinscribing the importance of the “genius creator” as a central component in our understanding and appreciation of Hymnen. He didn’t have to be there for the playback – but he was, and somehow that makes it better, possibly for reasons hinted at above. Which is fine with me, except I thought one of the things that 20th-century avant-garde composition was trying to do was question the centrality of the composer as the sole creator of the work, undermine the principle of authorship. Now that I think of it, small chance of that happening with someone of Stockhausen’s grandeur. From 19th January 2018.