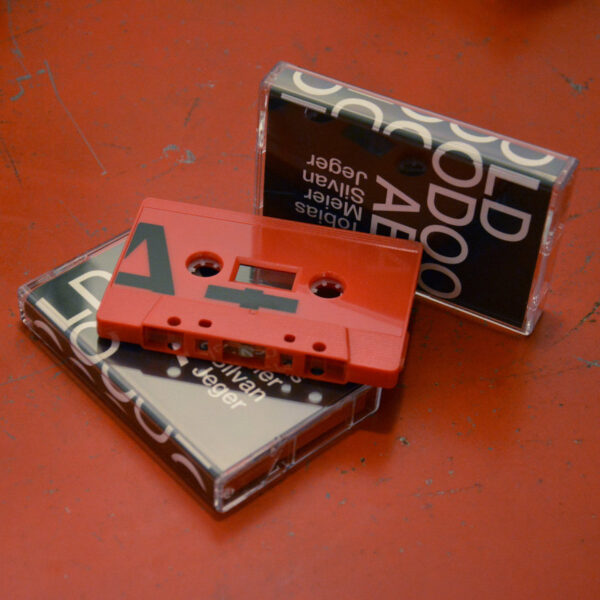 Cold Voodoo – free jazz duo from Switzerland, Tobias Meier on saxophones and Silvan Jeger on bass. AB+ (WIDE EAR RECORDS WER036) is title of album and is supposed to be saying something human blood types, echoed in red shell of cassette. On more prosaic note, label points out that cassettes have two sides. Combination of just two instruments actually works quite well and while there are moments where the two of them bump and scrape against each other generating some form of human warmth, I kind of prefer it when they sound sickly and pale. The opening moments of side A especially fit the bill, the sound of some entity just staggering along as if possessed by grippe or influenza. At this point the name Cold Voodoo becomes especially apt; could be a victim in throes of a curse sadly wandering the pathway on the way to own death. Once cursed, it is inevitable.

Admittedly the B side begins with some shrieking, jabbering and burbling noises from the pair of them which resemble an annoying, petulant take on Ornette and other free jazz heroes of the past, but it fits in this context; I’ll take the medicine for this nightmare. Soon they settle back into the death-warmed-over mode which I’m enjoying so well – washed-out tones, a barely-breathing saxophone, a bass that can hardly lift a finger to scrape its own strings or slap its sides with gusto and elan. Lethargic movements, spastic actions, and a sense of futility…even the tunes are barely finished and wander off the stage scarce half made-up. Well, we last heard Jeger as part of This Difficult Tree, a strange combo who made an unclassifiable record with some jazz elements, and didn’t appeal to me completely; also reminded me of Day & Taxi, in which he plays, and I recalled how that stiff-necked group misfired for me. Maybe I’ve found the right context in which to hear his free-form plucks; turns out there are plenty more outlets for his talent, including PLLANT, Ret Suhner Quartet, and Kingdom Behauptung – the last is a conceptual pop band (yikes).

Tobias Meier conversely gets nothing but praise from my flapping lips, given his status as leader of the Im Wald quartet and also as a member of Things To Sounds. On both those records, we dug the precision and compactness of Meier’s conceptual ideas and playing, but here as Cold Voodoo we hear another side to his schizoid personality. I won’t say it’s exactly loose, but one button on the shirt has been undone, and he finds he can discuss matters which he wouldn’t normally admit to others. From 27 February 2018.