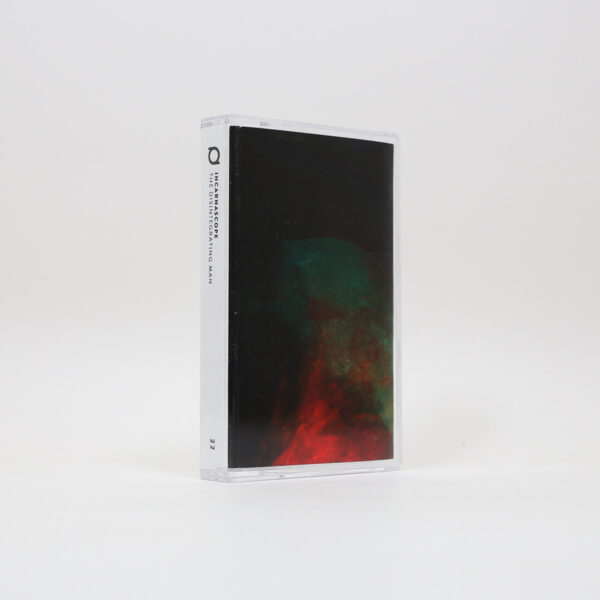 English drone experimenter Nigel Samways continues to impress us with his understated but highly effective sound-art music crossover works… regular readers may recall we first heard him in 2014 with Nuclear Beach, a haunting work themed on the idea of a post-nuclear landscape and attempts to convey corresponding states of psychological bleakness and despair. He’s returned to that same trope with today’s offering, The Disintegrating Man (DINZU ARTEFACTS 22), released under the name Incarnascope, and it’s a cassette which by his own lights is “loosely based on the fond concept of the last man left alive”, by which we are given to understand the album depicts an empty, shattered world which is explored freely by a single disaffected soul.

What ends up on the tape is a poignant mixture of unsettling emotions, sometimes sunk in the depths of black despair, sometimes finding a strange beauty in amongst the glorious wreckage wrought by megaton bombs, at all times feeling a terrible nostalgia for the past. He realised this one – working mostly on magnetic tape, it seems – with the help of Walker. This name is doubly resonant for me as Nuclear Beach reminded me of everyone’s favourite story of Angloid nuclear terror, i.e. Riddley Walker by Russell Hoban. I’m going to assume that a well-creased copy of that paperback resides on Nigel’s shelf and he uses its no-nonsense prose to dream of an imaginary lost Albion every night. All the elements I enjoy about Samways are present and correct: a maximal surface, without ever getting too cluttered or too noisy, with plenty of information for the senses to process; fragments of spoken word and poetry inserted at unexpected intervals, lending many a dream-like moment to the event; and beautiful musical interludes, buried under distortion and distressed tapes of nameless field recordings, struggling to make their way to the surface of a murky pool of sound.

These musical moments are unfinished, out of context, all part of the general uncertainty and ambiguity of The Disintegrating Man, sometimes realised with piano picking out a heart-rending melody like a mechanical music box. All of this brings home the central idea; how fragile is our culture, how easily forgotten, how the meanings of things are barely connected and survive on only the slimmest of chances. What better way to express all this than through the metaphor of a disintegrating man in a world that has fallen apart, leaving only a few traces of our former civilisation behind. As ever, I’m too late off the mark with this review; all 75 copies of the tape have already sold out from the (American) label, though it can be streamed from Bandcamp and Nigel may still have one or two copies available. A fine work. From 7th March 2018.