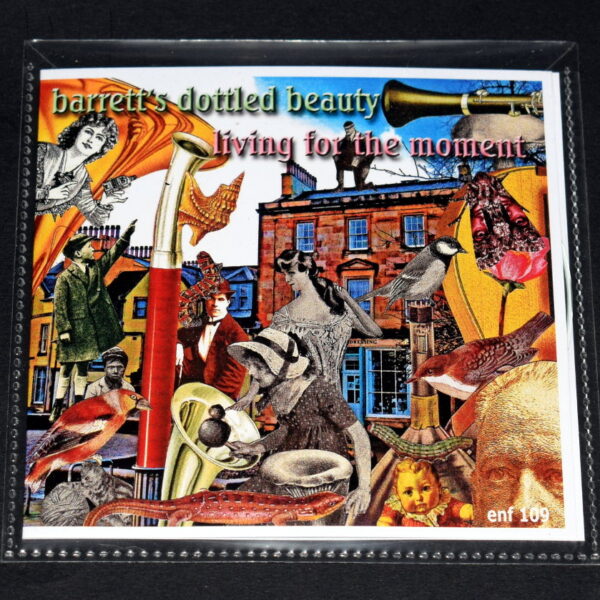 Here’s some items I received as a result of attending Listen To The Voice Of Fire at Ceredigion museum in March 2018. For my recollection of the event, see this post.

Barrett’s Dottled Beauty is the Scots duo of Gayle Brogan and Alan Davidson. We noted them in 2017 with their Owls In Their Eyes album. Living For The Moment (LES ENFANTS DU PARADIDDLE ENF 109) takes their winning formula and extends it even further, in terms of duration, psychedelic excess, and hypnotic dream-like droneworthiness. On ‘Featherless Fools’, there’s 32 minutes of cosmic meandering to savour, where echoed instruments and fey vocalising are stewed in an endless brew of protean drone. Takes us back to the glory days of 2004 when this sort of thing was abundant on the Digitalis and Foxglove labels in America, but I like to think Gayle and Alan have their own unique folk-inflected slant on the genre. Anyone can make Cosmic Courier comparisons, but buried deep within the amorphous non-structure of ‘Featherless Fools’ nebulous clouds, I bet we can hear traditional Celtic pentatonic scales just waiting to resolve themselves. The second cut, ‘Sunlight Bathed & Golden Glare’ is more easy to accommodate on one side of an LP and is less “out there” than the main track; more easily identifiable guitar playing and vocals, instead of heavily treated alien sounds. It’s also as much a studio concoction as it is a performance; overdubs, backwards tapes, edits, layers. The music is drenched in light; it more than delivers on the promise of its title. Lovely collage cover for the CDR by Alan, as ever. When they do limited vinyl runs (100 copies) of their records, Alan prepares each single collage cover by hand; every release sold is an individual artwork. 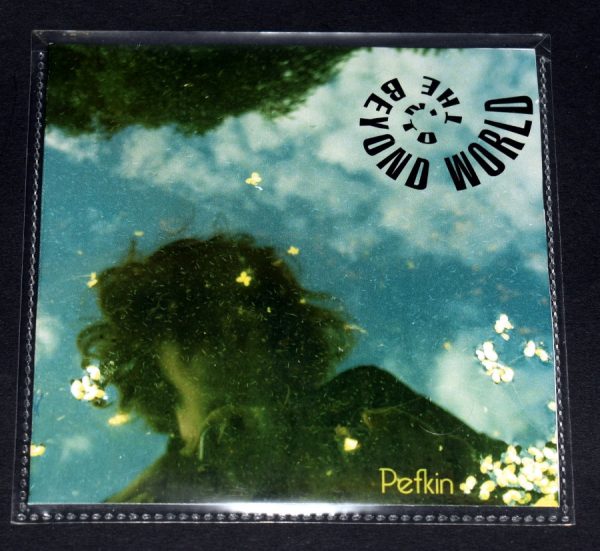 Into The Beyond World (CURIO 11) is a solo Gayle Brogan record, appearing here as Pefkin. This originally came out on Reverb Worship in 2015 but is now reissued by Curiously Euphonic, a CDR label to showcase her solo work and that of Electroscope. Last heard her solo on Liminal Rites in 2016; I was still determined to align this music with traditional folk music, but today my sense is that Pefkin is attempting something far weirder and extreme. Each title alludes to a private action or event of some sort, which border on something occult or ritualistic. Pefkin explains and reveals nothing, but simply sings and whispers into her echo chamber device and creates waves of cascading music with a slow determination. This is done against very simple backdrops – few instruments, spartan playing, only the barest suggestion of a melody. John Cavanagh once again supplies his VCS3 for one track, and the cover art confirms Gayle as both a child of nature figure and an astral entity dropped from the skies. Spooked-out twilight listening that is both unsettling and compelling, drawing you into a private world. 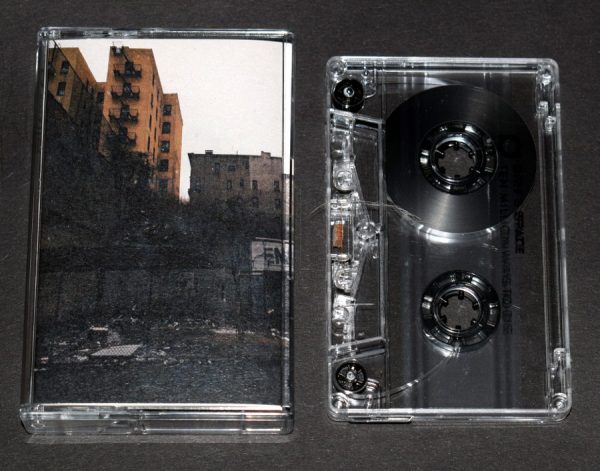 Andrew Leslie Hooker handed me a copy of the tape by Dirt & Space, which is him teamed up with the multi-talented Graham Dunning. Just as well, as the physical release is now sold out at source. Ten Million Ways To Die (DINZU ARTEFACTS 08) arrives with a rather dismal photo of urban squalor and nine tracks of varied electronic noise, whose episodes are titled with cryptic references to an end-of-the-world scenario which seems to involve both military forces (‘Ashen Regiment’) and occult ones (‘Mount Hex’). Although Hooker performed a tabletop set at the Museum, using controlled feedback, this record was made using many physical objects and tape manipulation (including loops), as well as the no-input mixing board. Consequently, it rolls out with the brutal indifference of an armoured vehicle, crushing pebbles beneath its remorseless tracks; what I mean is there is much heft and weight to the sound, and the lower bass tones are of the sort that can induce nausea, despair, and physical sickness in the enemy. Some moments of Ten Million Ways To Die work quite well, invoking the details of an unpleasant new world filled with unknown terrors and almost devoid of human habitation; and there’s evidently been a lot of engagement between the players and their non-musical objects, milking the plate and spring reverb units until they yield fresh aural horrors. In tone and spirit, it’s a kind of contemporary update on industrial music genres. They may keep the harsh noise bursts to a minimum, but the mood of gloom and menace is very much to the fore at all times. 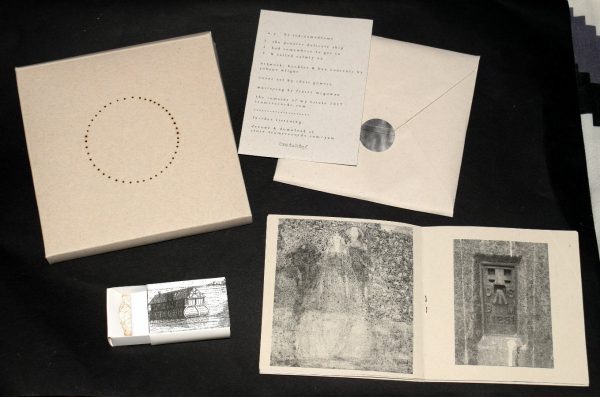 Johann Wlight was introduced to me by Gayle in the final moments of the evening at Ceredigion, at the time when everyone was going home or to the pub. Wlight was someone I needed to know about, I was assured; obscure, enigmatic, prolific, touched with genius perhaps. And he had a history of releases going back to the 1990s. I met a friendly unassuming fellow who promised to send me something in the mail. He did. The release might be called a.y. and is credited to itdreamedtome. I recall Johann saying he got this from the film The Enigma Of Kasper Hausar, and it turned out we share an enthusiasm for that most romantic of cinematic works by Werner Herzog. (One of the most powerful dream sequences in the film was in fact shot, on Super 8 mm stock, by someone else and not Herzog – but it’s unforgettable.) The CD also arrives packaged in bits of grey card, with inserts and a booklet, and a matchbox with an old engraving on the cover. Its contents have not yet been examined; I don’t suppose it’s a hex or sigil, but it’s mysterious enough. Even the outer box has a sign of some sort; a perfect circle comprised of small burnt holes. The booklet is my favourite bit; a series of wonderful images (from books, found photos, etc.) followed by a brief catalogue of the sources, which include everything from church wall paintings and landscapes to John Dee monads and holy artefacts. If I’d just received the booklet alone, I’d have recognised an enlightened soul. Then there’s the track titles, which make use of lines from the poem by W H Auden which refer to Landscape with the Fall of Icarus by Breughel, and which appeared fleetingly in The Man Who Fell To Earth; another layered and annotated reference which is a delight to me personally. As to the music, I suppose it’s possible to categorise it as “drone” or “ambient”, but there’s something deeply poignant and heartfelt going on within these delicate, slow-moving, ever-shifting tones; it’s nothing to do with process; no indication anywhere, for instance, of how the music was made, as Johann Wlight evidently doesn’t think it’s that important. It has the kind of quality that somehow it’s been discovered, rather than made; a natural phenomenon, a rare one, where you have to be in the right place and the right frame of mind to even perceive it. Mission accomplished; my romantic spirit is duly stirred, my love of esoteric references satisfied by these poetic contextual references, in the form of images and texts. I’m even torn writing about it; I’d prefer somehow to let itdreamedtome find its own audience (if indeed it requires one) in its own time. However, this one can be found through The Remains Of My Estate, while it lasts.