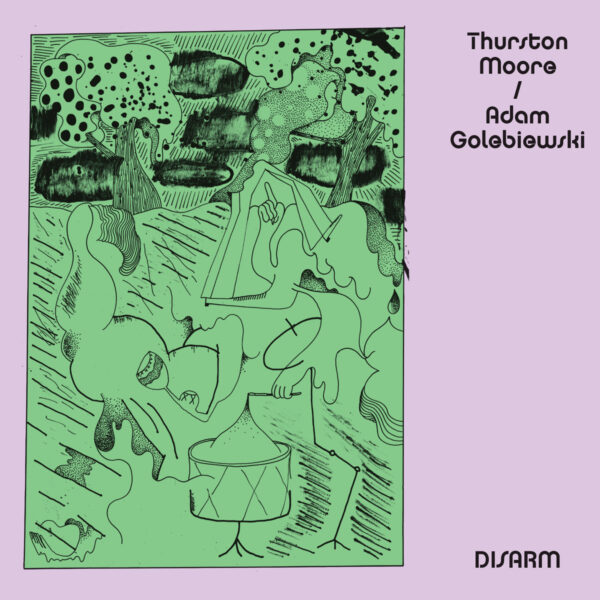 Polish percussionist Adam Go??biewski has impressed us a number of times now, first with his solo album Pool North from 2015, then teaming up with free jazzer Fred Lonberg-Holm on Relevant and again with Sharif Sehnaoui on Meet The Dragon. Adam is I think largely untutored and has cultivated his own unique approach to hitting things, at once rugged and raw and extremely intimate too. He has been more successful than fellow Pole Mi?osz P?kala at getting up-close and personal to his chosen kit, but to be fair P?kala is approaching matters from a quite different angle (via composed works). Go??biewski seems to be a real hands-on in-the-room sort of fellow, who can’t wait to roll up his sleeves and get on with the task. On Disarm (ENDLESS HAPPINESS end#4), he’s doing it with famed American avant-indie guitarist Thurston Moore, on recordings they made in Warsaw and Poznan in 2014. I confess it took me a while to get “into” these performances which at first struck me as a bit sluggish, slow to start on cold mornings, too many moments when the bus stalls at the top of a hill.

By time of track 4, called ‘Distract’, it began to make sense as my worm-like brain found a way through these craggy 13 minutes of twisted wood grain and molten metal shards. Perhaps this means Moore and Go??biewski are at their best when making “art music”, with concomitant pauses and meanderments through ambiguous passages of mental rope-walking, rather than the more straightforward crowd-pleasing “rock it out” attempts, such as we hear earlier in the set, particularly on ‘Distend’ where everyone’s favourite New Englander performs his trademark neck-scraping abuse to great acclaim. Even so, I’m not getting quite enough of the metallic grind and resonating tongs which I crave from my favourite alloy-stroking Pole, and there are precious few sound windows when his unusual craft is allowed to fully shine. This isn’t to say the amplified Thurston is hogging all the space, as he’s clearly attuned to the needs of the performing situation, but I am sensing a certain lack of fire and quite a lot of water-treading in shallow pools, which betokens the possibility that the rapport between these two wasn’t everything it could have been. Maybe it’ll work out better on another date.

Lasse Marhaug did the mix and mastering, and the groovy drawing-scrawls are by Dennis Tyfus who runs Ultra Eczema. From 9th April 2018.