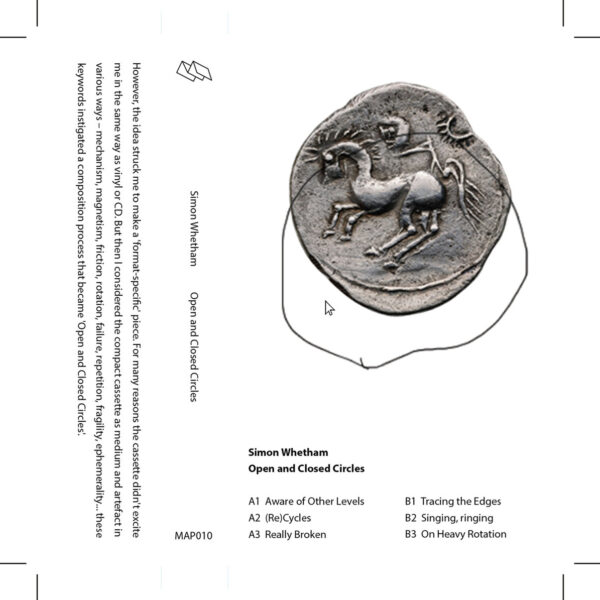 Something of a puzzling listen from the dependable Simon Whetham, the English sound artist who is often heard associated with extreme field recording projects (for example the recent Estonia escapade, documented partially on Throttle and Calibration). On first listen I was pretty blanked out and disoriented by the disconnected scrapes, hums and buzzes on Open And Closed Circles (MAPPA MAP010), but it’s slowly starting to make sense as a radio broadcast from a lost ocean, populated by people who can only speak in broken fragments, and where the days are filled with grey silences that hang in the air like so much dust.

Whetham seems to be a deliberative fellow, weighing words like a mute sage before acting like a Zen master; no hasty snap decisions for him. He didn’t rush into the commission when the label, Mappa, asked him to do something that was destined to be issued on cassette. After all, he’d recently decided to abandon formal composition of sound art and instead present his work in the context of gallery installations and performance, where (presumably) there are more chance elements at play. However, he liked the idea of a cassette tape as a storage medium, and had a mental shopping list of some its physical attributes which he might exploit. Said list is printed on press release and also on the Bandcamp page. In it, Whetham chooses to emphasise the weak points of this most under-estimated of playback mechanisms, thinking about how moving parts come into contact with tape and may cause damage, and perhaps dropouts on the flimsy tape itself. The very material of the tape itself started to appear like a fleeting, evanescent mist to him, no more than a radiance. “The cassette didn’t excite me,” is his own estimation of this situation, “in the same way as vinyl or CD”. These latter two could indeed be reckoned as somewhat more sturdy than the cassette, which as already noted is regarded by many as the 7-stone weakling of the music herd, the sickly pale cousin on his way to a seaside health resort.

It’s these qualities I suppose Simon Whetham is trying to turn into virtues on the mysterious suites that occupy Open And Closed Circles, probing the skinny musculature of the medium and seeing what makes it tick. Now we must point out that he does not, in so doing, call attention to the mechanics of the situation at all, as for instance Andy Birtwistle did on his series of cassettes. In fact I’ve already mistaken these sounds as field recordings from a strange dimension, so natural and well-formed on their own terms they do be. Far from being process art, grinding tapes into dust and rubbing motors the wrong way for the sake of just doing it, this album instead emanates subtly unusual sounds possessed of an eerie charm, everything fingerprinted with Whetham’s wispy personality. I think this means we can account this experiment, even if it’s probably not a major one, a success. Many thanks to Jakub for sending us this from Slovakia. Arrived 12 April 2018.