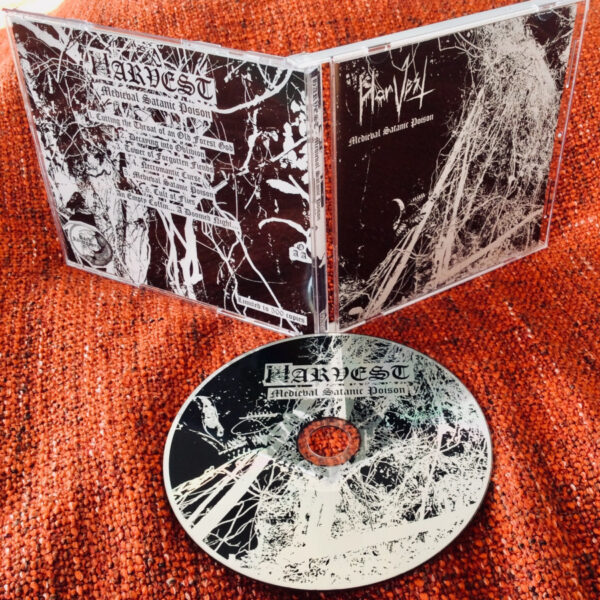 Some of the most compelling recordings made in Black Metal are those made by lone practitioners. After all, BM, with its tradition of anti-social misanthropy, lends itself perfectly to bedroom-dwelling hermits whose mission in life is to make offensive noise. This applies especially to the rawest expressions of the BM form, where grim isolation and limited lo-fi resources are proudly hailed as positive virtues.

Having said that, Medieval Satanic Poison by Harvest (DARK ADVERSARY DA 76) isn’t strictly a solo project. The CD insert does actually credit a second musician, named Blackheart, but he/she is merely billed with providing ‘session drums.’ Harvest therefore remains the invention of one Australian miscreant named Azgorh, who, more famously, fronts the much higher-profile BM project, Drowning the Light. Azghor, in his Harvest guise, plays buzzing guitar, creepy synth and emits his harsh vocals with a unique toad-like cracked gurgle. On the black and white sleeve photo our man can be spotted in full corpse-paint, lurking among the bleached out bracken and undergrowth of his homeland habitat.

This is Harvest’s second full length. The first, Forgotten Vampyres of the Melancholic Night, crawled out of the casket back in 2013. The style of that debut is not much different from this 2018 offering. Everything here is stripped down and highly primitive and while the overall mood is caustic and fierce this disc is packed full of accessible traditional BM riffs and hooks. There are some pleasingly spooky instrumental interludes to relieve the onslaught, when Azghor switches his rickety synth to ‘vampire movie’ mode. A shame that his rather overwrought and dense Drowning the Light releases will gain much more attention than this winner, because Medieval Satanic Poison benefits from going straight for the jugular.