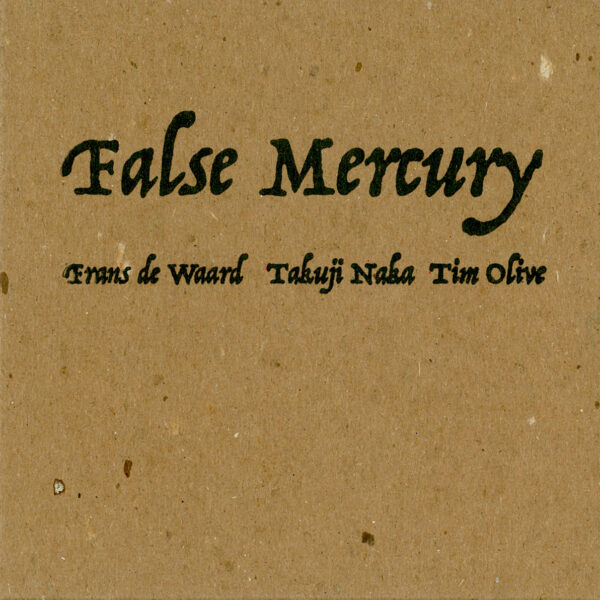 Here is long-standing TSP fave Tim Olive once again with a new release on his 845 Audio label. False Mercury (845 AUDIO 845-8) documents him plus his buddy Takuji Naka, heard before on The New Attractive in 2016, and the European all-rounder Frans de Waard, caretaker to a million orphaned drones and under-stated works of processed sound. Matter of fact they did it in Nijmegen, which could be reckoned as Frans’ turf, after the duo of Tim & Takuji had performed at Extrapool. The three of them worked in a basement studio situated beneath Extrapool, toiling for many creative hours with home-made instruments, spring reverb devices, and electronic toys.

The lengthy session or sessions has been pared down to bring us just 31 minutes of entertainment on False Mercury. It’s a continual listen without a pause for reflection nor any of those annoying “silences” that blight certain modern forms of improvisation (as unwelcome as pregnant pauses in a conversation). Our threesome often declare themselves as “maximal minimalists” 1, which means very productive output from meagre instrumentation. Or else it means subdued playing from three hyper-active roaming monsters. Either way, for a dose of Canadian-Japanese-European three-way crosstalk, this represents your best value, investment-wise. Not as overtly off-kiltre as some Olive related projects have been, I do get the sense that on this occasion Mr de Waard – known as the mesmerising turbine of the lowlands – prevailed with his drones when it comes to overall timbre and pitch of the day’s proceedings. On the other hand there are some delicious instances of wonky instrument playing, crazy music boxes surfacing for a second, and even some faintly humourous moments which bob up and down like angler’s floats in the low-key grind and hum.

Two other lines of thought are worth taking on board before we wrap up this candy bar. The press notes remind us of what was happening overground while the three players were buried alive in the claustrophobic basement of doom inflicting cruel tortures on inanimate objects, and they invite us to speculate as to what this might mean. One event was an international bicycle race, and the other was a Queen covers band playing in a public square. Nobody has pointed out the obvious connection 2 between these two, so I will – 1978’s hit song ‘Bicycle Race’, containing many vulgar sexist tropes which reached a nadir with the poster insert that was included with Jazz, their album from that year. The other line of thought is that suggested by the title, which I assume is an alchemical term, and given that the package imitates the printing of an old 16th century volume, I’m sticking with my theory. This wouldn’t be the first time that modern music has likened itself to alchemical processes, but that just shows how valid the metaphor is. It also contains for me a link to Bruce Russell’s Corpus Hermeticum label, so perhaps it indicates the time is ripe for Olive to commence a “jam” with A Handful Of Dust and see where that leaves us. From 27th April 2018.