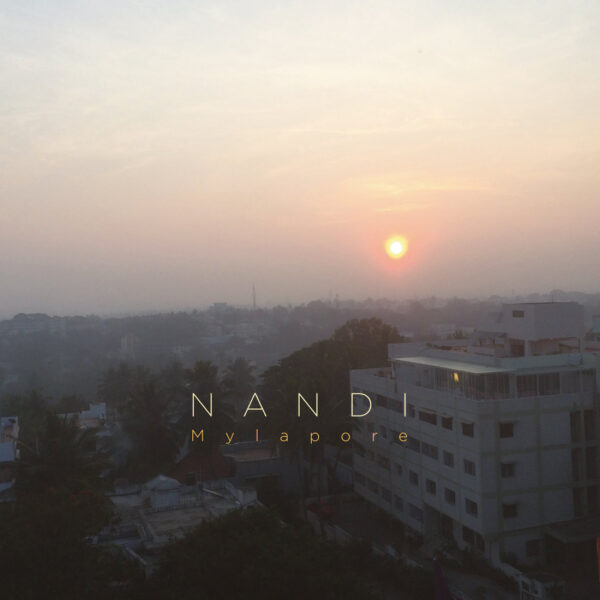 The movement to combine Indian and European musical sensibilities arguably set in motion by George Harrison with the recording of Love You To in collaboration with Anil Bhagwat and musicians from the Asian Music Circle in April 1966 continues unabated into the modern day with this collaboration of two French and one Indian musician. Nandi is a group based in Lille, France; on Mylapore they are Paul Lovergne on acoustic bass and konnokol, Ghatam Suresh Vaidyanathan on ghatam, kanjira, konnokol and vocals and pianist Stefan Orins. They aim to “…give the tried-and-true piano-bass-drums format a fresh new sound by blending jazz with South Indian Carnatic rhythms and melodies…” Ghatam Suresh Vaidyanathan has previously played on records by Paul Simon. Lovergne is currently unknown to Discogs although I don’t hold it against him – it’s no bad thing to be untouched by the hand of the digital revolution, perhaps. Stefan Orins, on the other hand, has a fairly substantial back catalogue mainly on the Circum-Disc imprint; run by a collective also operating out of Lille.

The first offering is titled “Eka Aneka”, where Vaidyanathan’s vocalese tabla rudiments are doubled melodically by bass and piano. Those with an interest in Indian musical forms may be familiar with this vocal rudiment technique. The pianist is encouraged to extemporise in a vaguely Weather Report style at three minutes… Vaidyanathan double tracks his vocal break at the end. “Prelude to Durga Part 1” is for anyone who wondered why there was no such thing as Indian-flavoured cocktail piano jazz – now there is. “Ananda” seems to have a freer arrangement to allow group improvisation, which apart from a slight hesitancy halfway through, works well. The European/Indian hybrid idea works at its best on “Paruppu Podi / Vijaya” which also manages to additionally reference – perhaps only fleetingly, and to me only – Slint. There’s a willingness to subtly subvert the individual instruments in evidence, like when Orins plucks or mutes the piano strings at the beginning of “Mango beans”. Later in the track, Lovergne quietly mutes his bass with his right hand; somehow making it sound like a heavy log rolling down a grassy bank.

Nicely recorded by Didier Ducrocq, but as all sources are from acoustic instrumentation and closely mic’ed for a detailed and representative sound, it sounds, in parts, a little dry to these ears. As you might expect, subsequent listens on headphones offer a more sumptuous listening experience; the players are of the stripe who favour the possibilities afforded by overdub-less live performance and so this is the most appropriate way to record in this case.

Mylapore is on the east coast of southern India, in Tamil Nadu, adjacent to Chennai. The internet tells me that it is “…an affluent, traditional neighborhood with a number of sacred sites and cultural venues. These include Arulmigu Kapaleeswarar Temple, with its elaborately decorated, pyramid-shaped tower; the colonial-era Luz Church, with an ornate, frescoed interior; and the Gothic-style Santhome Cathedral, built on the burial site of Saint Thomas. Nearby, The Music Academy hosts popular South Indian concerts and dance.” Whether any of the constituent personnel of Nandi have a personal connection to the place is not stated, but judging from this description alone, and the photographs of the city on the front and back of the cd sleeve, it is clear that Mylapore is an attractive destination. This group clearly hold it up as a beacon. Nandi are a cracking trio, already motoring, and only at the beginning of this particular journey. I’ll be looking out for their follow-up.