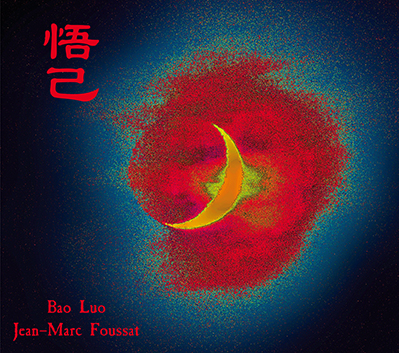 Surface Calme (FOU RECORDS FR-CD 28) is a team-up between Jean-Marc Foussat and Bao Luo, and represents a crossover between European and Chinese cultures…Foussat is certainly branching out from the stylistic restrictions of free improvisation with this one, and his trusty Synthi and AKS setup has never been put in a situation which demands such restraint. Bao Luo is a veteran Chinese rock star who sang with Self Education and Pressure Point in the 1980s, both of them described as “hard rock” groups, and she is notorious for affecting a rebellious look which one can only assume was politically a pretty dangerous move at the time, fostering thoughts of dissent among the young Chinese. Certainly, little information about this potential subversive character has found it way on to the internet, so the Eastern efforts to suppress Google searches must be working.

I have no idea how this team-up came to be, but Jean-Marc is going through a purple patch of try-anything at the moment, witness his recent efforts (which didn’t exactly catch fire) with Techno house musicians Dynamo Dreesen and SVN. Surface Calme – whose title is printed as Chinese characters on the front cover, I assume – is a very unusual record which veers from one extreme to another, suggestions of seething anger giving way to moments of serene contemplation. The former are expressed mostly in Bao Luo’s shrill intoning voice (she shrieks more than she sings) and in the wildest growls that Foussat can summon from his machines; the latter manifest mostly as flute and gu-zheng passages layered on top of uncertain, mixed-chord drone passages. In places, this reminded me of some of the recent work of Japanese player Haco, especially when Bao Luo sets up a simple rhythm through repeated chanting. Elsewhere, the record can verge on becoming soft-centred and New-Agey, but as a whole it’s a bold and unusual experiment. From 16th April 2018.