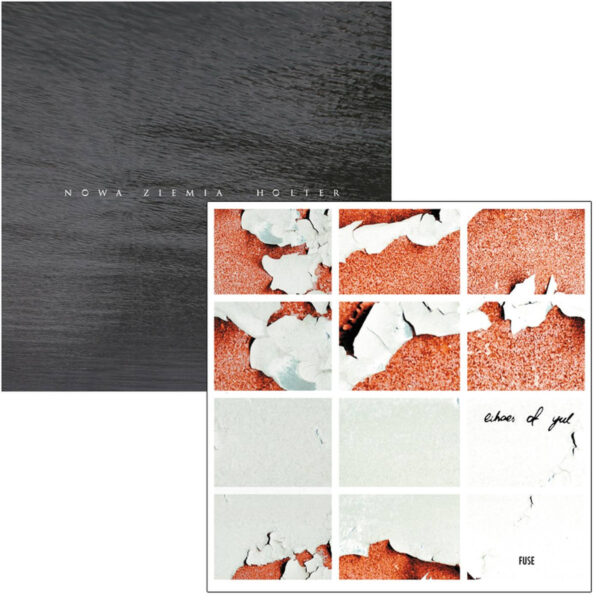 Nowa Ziemia might be Artur Krychowiak from Gdynia, who has also recorded as God’s Own Prototype. The earliest release from him I can find is Sceneria which he made in 2015 for the label Music Is The Weapon. We have heard him more recently where he “jammed” with two other guitarists, Dawid Adrjanczyk and Michal Banasik on an album that was so “moist” it was capable of inducing sodden atmospheres in the Sahara, even. Here, on the four parts of ‘Holter’, his slow-moving and effects-laden guitar solos are blended invisibly with bits of field recordings (apparently). Extremely doom-drenched drones seep out over the available space and gradually generate a strange alien beauty. This very solemn and portentous mood is something which Polish musicians (especially on this label) seem to excel at; one might almost say it’s encoded in their DNA.

Echoes Of Yul offers us nearly 40 minutes of ‘Fuse’ for his half of the split. Previous solo outings from Micha? ?liwa, The Healing and The Healing Sessions, felt over-cluttered and strained. However, this single-minded guitar droner (enhanced with shortwave radio, effects and drum machine) is much more effective. It might be because he wisely decides to refuse much in the way of variation, and keeps pushing away at the problem as surely as if he were rolling a gigantic stone up a mountain. My difficulty in the past has been when he tries out too many “styles”; maybe it’s better when he simply lets these ectoplasmic guitar forms just crawl out of his body cavity and let them slither where they may. The press notes suggest that this music is somehow apt to take control of the listener as we spin the disc, bringing us to a point of near-paralysis thereby. In that context, the word “fuse” might refer to a fusion of the bones, a form of arthritis. From 19th April 2018.