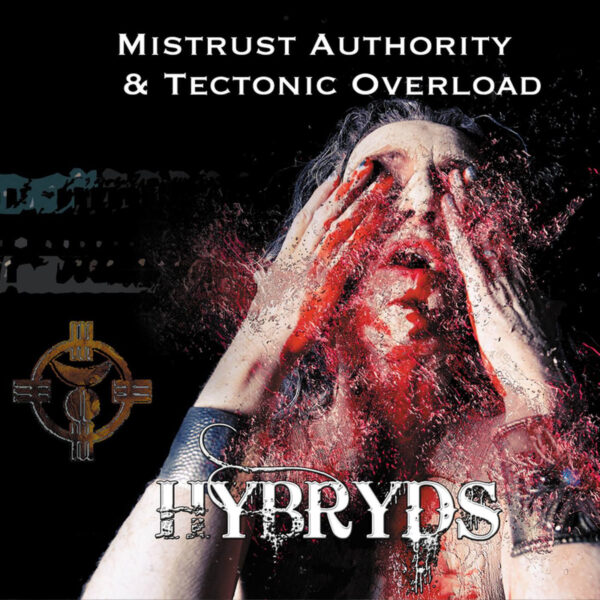 Last noted Hybryds with their compilation set The Ritual Of The Rave, which I (as a non-initiate to the dark world of hypnotic avant-techno crypto-dance music) found surprisingly accessible…this Belgian bunch are back again with another double disc set, Mistrust Authority & Tectonic Overload (ZOHARUM ZOHAR 162-2), which yokes together two of their releases from the glory days of the 1990s, reissued along with a plentiful dish of extra material…the first set, Mistrust Authority Promote Decentralisation, originally came out in 1996 on an Icelandic label with printed inserts which were covered with bizarre glyphs that might have been printed circuit diagrams, alien spaceship lettering, or magickal symbols. The “theme” of the dense music hereon proposes a basic cross between science fiction and drug culture, with its fleeting references to the acid gospel of Timothy Leary and its “quotes” from cyberpunk novelist William Gibson. Evidently Hybryds also liked the Lawnmower Man movie, which I suppose was cutting-edge in terms of computer dystopian nightmare movies when it was originally released, even if its CGI effects look endearingly clunky today. Compared to the simplicity and directness I enjoyed on Ritual Of The Rave, this particular collection is much more “dirty” in terms of its layers and overdubs, everything crammed together with thickened beats and menacing atmospheres. Even so, if played at high volumes (as I expect you to do), it’s easy to see how it will capture the minds and bodies of millions in a nano-second…I can see the swaying hordes already massed for attack, their frames “possessed” by the strong music and galvanised like corpses shot through with a zillion volts. The CD includes an extra 30 minutes of live music from a 1996 concert in Munich, although it’s largely very disappointing thin gruel after the “heavy” meat of the original album; processed voices, weedy beats and dreary drones are carried away on the four winds, to be dissipated in the ether.

Tectonic Overload is from 1998, originally on the German Ant-Zen label with artworks that continued the printed circuit motif. While not as impressively megalomaniacal as its brother, this set is slowly starting to make sense with its primitive, clonky beats and its scathing synth bursts, doing everything it can to resist melody and conventional musical structure. When the Hybsters get into a hypno-groove there’s no stopping them, except they also disturb our attempts to fall asleep with constant interruptions of obnoxious noise-explosions and abrasive distorted stabs. It’s also nice the way each tune is introduced by a clinical female computer voice, as if steering us through the levels of a gigantic computer game or one of those idiotic movies based on such games, such as those in the Resident Evil series. With its references to ‘Password’ and ‘Download’, this material probably all seems pretty quaint in today’s IT-saturated social media world, but in 1998 I guess this was pretty vital and new. Some live tracks from Leipzig comprise the bonus material, again lacking the force and conviction of the studio material, although ‘Agony of the Machine’ has a certain grisly charm. In all, much more industrial and brutalising than the previous rave-friendly release, and while its sci-fi apocalypse themes may not have aged well, the music still holds up. From 19 April 2018.