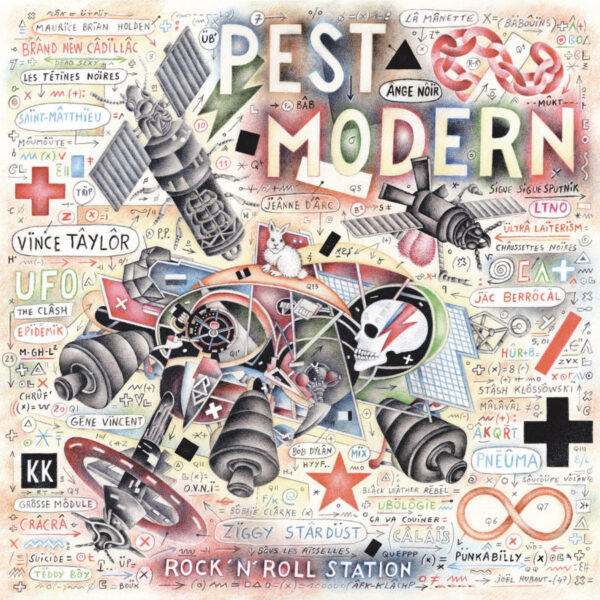 Enjoyable avant-rock malarkey from Pest Modern on their Rock’N Roll Station (MEIDOSEM RECORDS SEA011LP) LP…this French project is a father-and-son team, the visual artist Joël Hubaut and his son Emmanuel Hubaut, getting down in the studio to pump out these obnoxious, spiky punky-rockabilly tunes. Pere Joël, who once made a mini-album with Guillaume Loizillon called Epidemik-Text-Text-Nowtechno in 1999, wrote the words and probably does the lead vocals, grunting and belching in a pretty stinky fashion that gets directly to the point. He’s more a declaimer than a singer, but there’s no getting around his very replete voice, that’s for sure – it’s like facing a roadblock of French farmers. Fils Emmanuel supplies the music with drum machine and shrill guitar with tons of effects, especially reverb, and concocts a successful sneering take on garage rock with plenty of punk attitude, rockabilly fills, and 1960s beat-record backing vocals.

In case you were wondering, the title track is indeed a version of that song made famous by Jac Berrocal and Vince Taylor; the original’s black leather dream is, in Pest Modern’s hands, replaced by a sleazy nightmare of bondage fetish gear, cigarettes and cheap wine. I like the way Joël Hubaut throws himself into the role of an unreconstructed rock-star with abandon and elan; one false move and he would become a comical karaoke turn, but he pulls it off and manages to acquit himself throughout. His attempts to exude menace are melodramatic, but oddly convincing; he understands something about the deep theatricality of rock and roll.

On the CD promo I have, there are a bunch of bonus cuts where the album’s nine tracks are remixed by contemporary techno-sters such as Grandchaos, Ad Fiction, Mimetic, Autist, and Jemek Jemowit. Many of these remixes ignore the vocals (for some reason) and instead turn in serviceable club tracks and electro-rhythms; since they all seem OK to me, I can only assume they’re probably sub-standard beats, but even so. Put together, this set reminded me of two greats from the 1980s French Underground, that is Metal Urbain and Alan Vega. It’s almost like a mash-up of records by those geniuses, with perhaps some Dr Mix thrown in. From 10 May 2018.