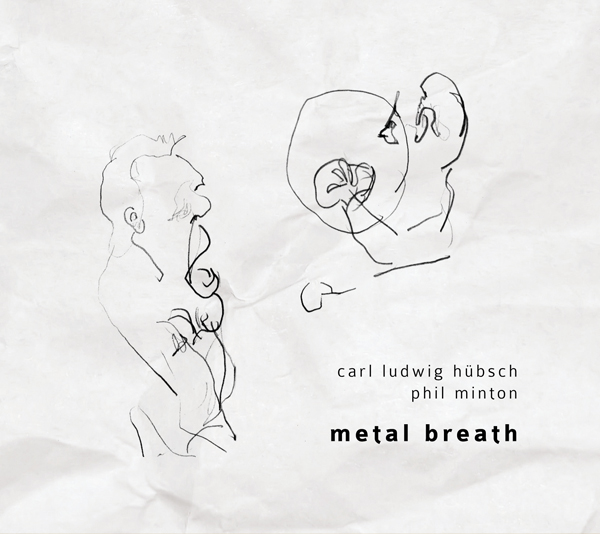 Latest release from the Slovenian label Inexhaustible Editions is Metal Breath (ie-010), featuring Carl Ludwig Hübsch and Phil Minton. László Juhász runs this label from out of his own matchbox and seemingly only publishes music that he personally would like to see set forth in the world, which is a very decent attitude to have. One high benchmark of his taste was the uncanny double CD set called Bakers Of The Lost Future from 2016, mainly because it was such a sprawling mass of hard-to-process sounds made by larger-than-life players, from a meeting of said players in real life, and event that is surprisingly hard to repeat. 1

With Metal Breath, we’re back to something more intimate and close-up, all-acoustic, and produced by the continual tuba puffings of Hübsch and the unearthly voice wailings of Minton, the English veteran / maverick who remains impossible to fit within any musical genre in a tidy fashion. We’ve mostly heard Hübsch in a trio with Pierre-Yves Martel and Philip Zoubek, for years a shining example of extended techniques and constrained, minimal music generation. Minton has recently yawped with Joëlle Léandre playing her contrabasse at his elbow on a Fou Records release; perhaps his work is best showcased in these small duo settings, one instrument + one voice for best effect. This release contains two very long pieces, ‘Copper’ at 24 mins and ‘Zinc and Blood’ at nearly 33 mins. Those titles are pretty “elemental” for sure. They make me think of the human system and whatever medical supplements I might need, such as a copper bracelet or zinc tablets, to supplement my diet and keep the ravages of senility at bay. The short three-minute piece ‘Flesh’ which completes the disc may confirm my theory that the subtext or theme is simply the frailty of the human anatomy, so Metal Breath is more than just a description of the players and their respective skillsets.

The two long pieces are sort-of pitched at two different speeds, with ‘Copper’ amounting to a slow despairing moan and the Zinc-Blood piece emerging at an urgent tilt with exasperated burbling and yodels from the mighty Minton mouth, while Hübsch parps out the brass-improv equivalent of speed-metal riffs. Indeed ‘Zinc and Blood’ is the one to spin if you want to delve deeply into the raw guts of humankind and learn some primal messages about what needs to be settled, achieved and accomplished before the sun sets on our glorious life. On it, Minton shows he can do the “weird” throat-singing drone with far more panache and facility than Ghédalia Tazartès, even; Tazartès may sometimes over-use that effect, dare I say it, just so he can continue to project his “shamanic” image to the audience, whereas our man Minton has no such axe to grind. In fact Minton’s sheer versatility was brought home to me when I got my ears wrapped around the Solid Gold Cadillac LP from 1972, that unusual rock-jazz hybrid he made with Mike Westbrook et al. It seemed uncharacteristic to me, because he sings songs on it. But all of that drama and variety is still in his music today, just wordless and more abstract.

Lastly, I also like Ingrid Hoberg’s photo inside this release – tilted horizon, primitive drawing on a poster on the wall behind the duo – but mostly for the image of Minton crammed into the right-hand side of the image such that we really only see his torso and head. His head is tilted back and his face looks like an agonised turtle dreaming of being an eagle. From 8th May 2018.