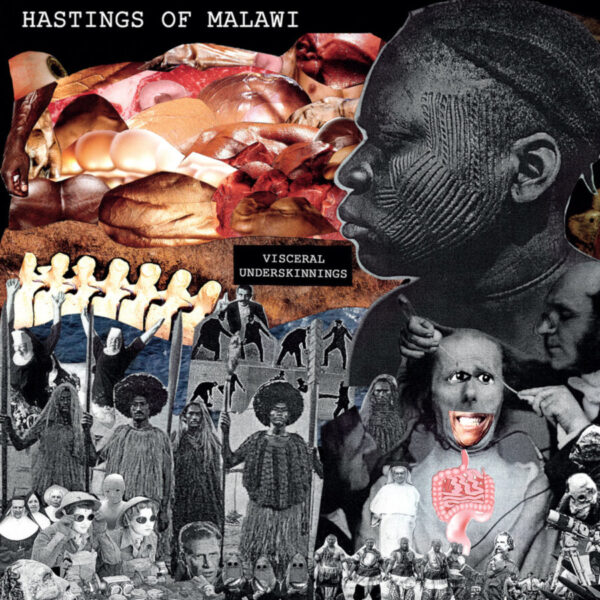 John Grieve kindly sent us a copy of this LP in April 2018. It’s only the second LP released by the sound-poetry group Hastings Of Malawi, whose original membership I believe included Grieve, Heman Pathak, and Dave Hodes. 1 Pathak was in the original Nurse With Wound group, appearing on many of their early LPs, while John Grieve has issued very little under his own name; those that I know of include two tracks on the Variations compilations put out by Paradigm. 2

The first LP Vibrant Stapler Obscures Characteristic Growth came out in 1981, released on Papal Products. There’s been such a long gap between these two releases, the wait can only increase the mythological status of this “British Dadaist” group, and I thought it would be worth relistening to it to see if any clues could be picked up. Both records could be characterised as “collage” LPs – that is they use a number of found sources and cut-up techniques to assemble the material. The collage technique extends to the cover art, which in the case of today’s release juxtaposes images of African peoples, food, faces, and militaristic uniforms in unsettling ways, as it were detourning an issue of National Geographic by folding in images from Ladies’ Home Journal. However, the enterprise is more than just collage – varispeeding and edits are just as important as the selection of content.

On today’s revisit spin of Stapler, I found a nightmarish experience awaiting me – strange voices and strange music all out of context, all information scrambled, all things familiar made unfamiliar and dark. The first side has clocks ticking, whale calls, quasi-scientific narration, percussive noises, frantic electric noise, detuned piano hammering, readings from a recipe book…numbers being recited…and of course the speaking clock, which might be the bit everyone remembers. This is the old speaking clock which you used to get on the telephone by dialling TIM. Come to that, there are also other audible voices speaking on the phone, and the sound of old dialling tones on the record. Most unsettling of all is the repeated voice saying “Hello? Hello?”, and receiving no response, as if uncertain of who might be there, if anyone. Some of the record contains something approaching music; clunky, sarcastic, lead-footed march-time tunes on the piano with inept playing of keyboards and synths…it’s sheer genius. Perhaps this is Pathak’s contribution to the Hastings collaboration. Meanwhile the B side dwells at length on a gruesome recipe involving slicing meat, described with some relish, and it opens with the delicious moment of a nursery-rhyme record followed by an interminable section of the speaking clock.

It’s probably futile to look for “meaning” in what is intended as a bleak, cold statement of the meaninglessness of life, but this spin seemed to be full of images of communication; or rather, images of communication breaking down. The human voice, and the devices we use to transmit it – especially the telephone – all are shown to be failing us drastically.

These themes continue some 36 years later, almost without missing a beat, on Visceral Underskinnings. To begin with, we have the same techniques of collaging, editing and varispeeding, only now they are used much more aggressively. There are moments when the human voice is distorted into absolute ruin, producing incoherent mumbles and inhuman groans. The varispeeding (it might be more accurate to call it time-stretching) does actually create some astonishing effects, especially one side two, where the layered artefacts from old 78s and discs and decaying tapes combine to produce audio textures that are almost aesthetically satisfying, if one could only ignore the unfolding nightmare they depict.

Secondly, there’s the telephone and the phone voices. On the new record, the speaking clock has given way to a pre-recorded digital voice instructing the caller to press a number to select an option; again it’s the voice of a woman; but the 21st-century version is distant and uninterested in anything, despite her efforts to sound helpful. This segment leads to repeated phone button pressing, to produce a short mini-symphony of overdubbed digital dial tones. Thirdly: there’s another disembodied voice saying “Hello? Hello?”, almost a direct match for the Stapler LP, as if answering their equally-lost friend.

These sampled voices turn into pure terror by the end of the LP, where I seem to hear something like a witch, or a victim of demonic possession…she or he is spitting out pure venom and anger, perhaps in German (there are other foreign languages on the LP too); edits and studio effects speed up and distort to make this even more nasty than it should be, and the sudden bursts of horror-movie music played on an organ don’t help the mood, nor do the calming chants of what might be intended as a priest or congregation attempting to exorcise this possessed soul. The horrifying intensity of these grooves – near the end of side B – cannot be overstated!

These examples I cite all contribute, I think, to the continued theme of communication failure; other instances include the Numbers Station sample on Side A, directly after the dial tones. The repeated numbers – themselves an index of cryptic, coded communication – are soon overlaid and repeated until they too become gibberish, at which point an old record cuts in featuring the whistling of George Washington Johnson, an entertainer who died in 1914. Just one of many listening moments which are guaranteed to short-circuit common sense.

If we wanted to seek out further subtexts, we could point to the critiques of modern consumerism and military interventions (forces which pretty much dominate everyone’s lives today), but they are done so fleetingly and without unnecessary emphasis, that it seems that these themes are so obvious to the creator that they are barely worth mentioning. I refer to the old military march record, which is at first jaunty and then deflated when replayed at quarter-speed; the brilliant TV sample of competition winners at the end of side one; and the close of side two, which gently juxtaposes upbeat adverts for computer gear with the sounds of military aircraft.

All of these recognisable elements are sandwiched together with computer music, and with noise – very good sound art noise 3 – like a more musical version of The New Blockaders, often sounding mechanical, groany, turgid and alarming. Some of what we hear may be derived from “the many sound sculptures produced by Hastings of Malawi over the last 30 years”, as the Sub Rosa webpage informs us, but the sound manipulation is remarkable – a very extreme form of musique concrète, that changes the nature of things to the ultimate degree. I suppose Visceral Underskinnings could easily be read as a “noise” record, which would tend to align it with the history of industrial music and related enterprises, but I would prefer to see it as a text; an audio text where every sound has been selected, arranged, treated and sequenced with considerable care. You can dig out more and more from this text every time you spin it, and there’s enough information here for scholars to go mad as they try and process it. “An epic sound poem,” say Sub Rosa, “a 40 minute film without light”. Limited edition pressed in yellow vinyl; very highly recommended. From 20 April 2018.

Updated 08/01/2019 to incorporate clarifications and information from John Grieve.