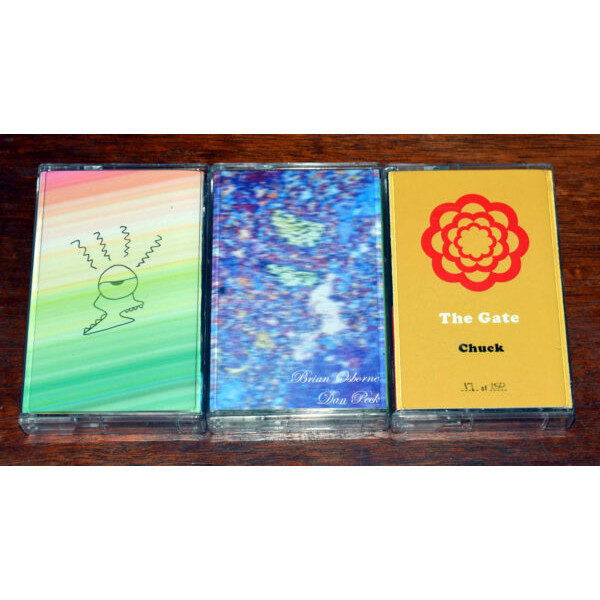 Got three cassette tapes courtesy of Dan Peck, the New York performer who can do things with his tuba that violate the laws of space and time…or at any rate earn him a citation from the Brooklyn Violations Bureau. The Gate happens to be his “acoustic doom metal” project where he blows his brass monster in company of Tom Blancarte’s upright bass and Brian Osborne’s drums, and The Gate Live! (TUBAPEDE TB09), a sizzling live document, is released on Dan’s Tubapede label. Previous outings Acid Soil and Destruction of Darkness were trying to prove the viability of acoustic noise that so resembled doom metal that even Bertram Z. Lewis, the most tattooed and pierced man in all Rochester, couldn’t tell the diff in a blindfold test, but in this live situation the threesome are free from the formality of the studio, and let rip with a solid continuous blast of fast moving ultra-clipped percussion (like being shorn by blunt scissors), bass-playing that resembles a grumbly furniture dealer on speed, and tuba work that’s as baroque as a Charlotte Russe made from painted plaster by Claes Oldenburg. Elements of heavy metal, free improv and 1960s Sun Ra all coalesce in this glorious uplifting noise, piled up in two generous and lengthy scads (these guys must be great fun at the annual NYC Marathon) entitled ‘Rembrandt Von Schlippenjovi’ and ‘Phantasmarrhea’. Over 78 minutes of powerful terror-drone fit for those Halloween nights. Note the clever references there to European FMP hero Alexander von Schlippenbach and primped-up metal boys Bon Jovi from Noo Joisey in one of those titles, promising an unholy cross between free improv and heavy metal, a promise on which they more than deliver. Essential – and at time of writing it looks like the cassette is still for sale from the Tubapede Bandcamp page.

Here’s The Gate again on an old cassette (from 2015) called Chuck (ASTRAL SPIRITS AS020 / MONOFONUS MF103) where the unholy three turn in a couple of agitated blasts recorded at Menegroth, The Thousand Caves (?). ‘Demon Loaf’ is as unpleasant as anything the Butthole Surfers recorded in their prime, and Dan almost substitutes for a manic Gibby vocalising through his megaphone with his splendidly “articulated” brass utterances (I mean he almost sounds like a talking man). The rhythm section are hammering in the rivets on a bridge using their bare fists meanwhile. Equally obnoxious are the mad “quacking” effects that afflict us at the start of ‘Orlan Dorf’, named for a lost character from an August Derleth novel. I assume Tom’s bass is being assaulted by his two flippers to create these unusual slapping sounds, while Peck murmurs from afar in bemused tones. On ‘The Huldrefish’, The Gate are joined by bassist Tim Dahl and renowned NY trumpeter Nate Wooley, and they concoct a spooked-out creepster of dark drones played in the lowest possible registers. This fishy terror episode is more subdued than the usual attack-slaughter mode, but it kills twice as many of the enemy using such methods as poison gas, sound cannons, and psychological depressants; so effective is this fictional narrative that the players are compelled to “act it out” on stage, at times paralysed by forces that destroy their motor functions and wipe out their memory.

Final item is a split betwixt Brian Osborne and Dan Peck, another “old” release from 2016 (TUBAPEDE 04 / HEAT RETENTION 37). The Osborne side is sheer genius – he experiments with a home-made percussion set-up involving metal strings and percussion, combined with “soundtracks for an imaginary horror movie”. Sinister, string-out, wasted, desperate – these are the keywords and emotions evoked by this unsettling, slowly-creeping plasma-blob as it makes its away across bare floorboards. Osborne runs the noise label Heat Retention Records, of which I wish I had a complete set of their CDRs and seven-inches. This music is somewhat in the “tradition” of Hair Police, or that solo CD by Nate Young (Regression) which was a high watermark for me in the field of alienated, depressive art-drone, but Osborne ups the ante by adding his alarming percussive metallics, which sometimes emit mocking tunes of agonised delight. Grimly fascinating! Peck’s side is ‘Wendigo Calls’, and could perhaps be characterised as a process piece – it involves a four-track tape recorder and “a completely acoustic tuba sound”, combined in some low-key electro-acoustic manner I would assume. He too aims at alienation, at any rate he wants to convey the sensation of “a field recording from a distant planet”. Unlike his full-bodied tuba roarage when he’s doing it with The Gate, this ‘Wendigo’ piece uses small gestures, intimate sounds, and breathy effects that will have you glued to your speakers in tense expectation, as if you are indeed beaming in messages transmitted in alien code and are straining to catch the next broadcast. The actual “Wendigo” is a monster from Native American mythology not unlike an elk on two legs (lives in forest, eats humans), and this sound works equally well as an invocation of the voice of that monstrous chimera. Despite quasi-psychedelic cover, this is actually one heck of a “dark” tape issued from Hellish regions.