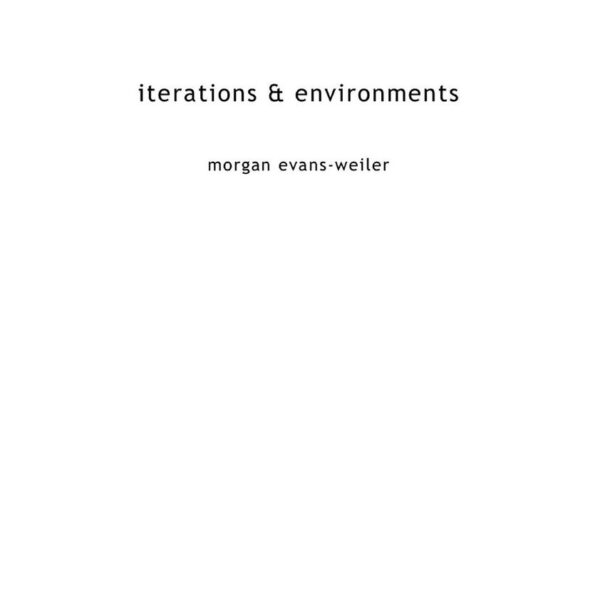 Iterations & Environments (rhizome.s #23) is a new release on the French label Rhizome.s, a showcase for contemporary minimalism and high-end experimentation. This time Morgan Evans-Weiler is given space to present two lengthy works, both supreme examples of exquisite and delicate music. Evans-Weiler is an American composer, director of the ensemble Ordinary Affects, collaborator with many significant musicians, and his music has been released by Suppedaneum and Another Timbre. I have tried browsing his website for the history of his earlier works, but even his capsuled descriptions of them are very minimal. He has experimented with open scores, modular scores, difference tones, overtones, that sort of thing.

There’s something almost opaque going on here, despite the translucent tones offered by his violins (which he plays himself, perhaps overdubbed, on the first piece ‘Iterations’ composed in 2015-16). He’s also negotiating the composer-improviser divide without even drawing attention to the problem, just naturally assuming his right to make music. ‘Iterations’, as mentioned already, is all violins – forming a gaseous haze of gently colliding tones, and creating a melancholic, slightly astringent atmosphere, yet so gentle as to make even “spectral” composers or “microtonal” music appear over-cluttered; Scelsi and Ligeti are almost bombastic in comparison. Though slow and unobtrusive, this one is a continual passage of unbearably beautiful sounds (with none of the cryptical guessing-game blank silences that we sometimes find on this label), and takes you to a place you won’t want to leave.

For ‘Environments III’, composed in 2016, Morgan supplies electronic music and is joined by the piano of Emilio Carlos Gonzalez. My uneducated impression is that this piece is coming from quite a different place – seems a lot more abstract, restrained, and not so immediately self-evident in its aims and objectives. The sweet violins of ‘Iterations’ are at least connectible (just about) to a tradition of orchestral or chamber music, but this electronic-piano riddle is much more futuristic, aiming for a new breed of ultra-pure 21st-century minimalism that unshackles the listener from the baggage of Steve Reich and La Monte Young. The low-key humming drones of Morgan Evans-Weiler electronic set-up are quite haunting, like ghosts of a Pauline Oliveros Buchla piece or half-remembered dreams of an Eliane Radique sine-wave meditation. In this near-white field, the piano player adds isolated notes in a parsimonious manner – one or two drops of rain landing on a vast concrete platform. And am I imagining that I hear traffic sounds or an ocean in the background?

Very impressive work; Pedro Chambel is building up a very strong identity and aesthetic continuity with his family of releases. From 10 May 2014.