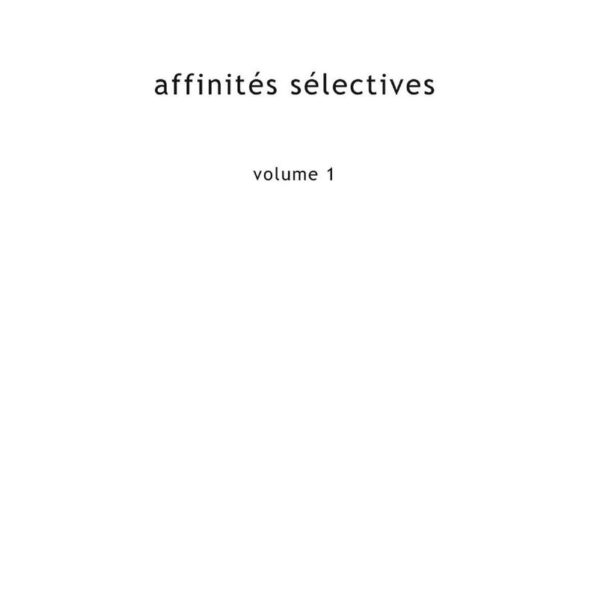 On Affinités Sélectives Volume 1 (rhizome.s # 22) we seem to be seeing a departure from the usual minimal-composition pieces that the French label rhizome.s specialises in, and a slight move towards music in the electro-acoustic improv vein. However, lovers of the unobtrusive and the quiet won’t feel left out, as much of the music here verges on the wispy, ghost-like, and non-existent as the sounds haltingly make their way into the ether like washed-out spectres. Firstly wre have four pieces recorded at a Swiss venue in 2016 – two Russian players, Alexander Markvart and the ubiquitous Ilia Belorukov – were joined by Gaudenz Badrutt, Swiss electronicist who is of course one half of Strom. On the four parts of ‘Back Feeder’, these fellows make use of the now-common setup of musical instruments combined with field recordings and samples, and produce four passable hummers which exhibit considerable variance in the audibility stakes…part II is barely noticeable, while part III has a segment which erupts into a bout which could be mistaken for rough-tough table noise, but the brawl soon subsides back into the “respectable” atmosphere. Not bad; there are plenty of crisp moments and hard edges on offer, although I do grow impatient with the hesitant and uncertain gestures of the three, as if they were not quite sure of each other. There’s also an ounce too much of the usual semi-automatic droning sound which we usually find with this sort of set-up, almost defaulting to the “standard” EAI profile. If I were their coach, I’d send these three back into the ring for a few more hours of sparring or working out on the bag, after which they might be ready for a release on Mikroton.

For the fifth cut on this album, it’s the turn of the French to show what they’re made of; Quentin Conrate, Matthieu Lebrun, Anne-Laure Pudbut and Frédéric Tentelier lash it out on over 35 mins of ‘Gezeugt’, recorded in Roubaix we know not when. Matter of fact the venue itself is shrouded in mystery, since it’s named ‘Le Non Lieu’ which we might say as ‘The Non-Place’ in English. I’d still feel safe in characterising the work of this foursome as EAI, given as how we’ve got alto sax, organ and percussion bobbing about in the sea of light-drone generated by electronics and electroacoustic devices. These French grinders certainly get in the zone and stay there with these tense, atmospheric scrapers; it’s a happy combination of understated tones and drones blending into a pleasing layered squidge, and the metallic elements are so palpable as to leave a film on the roof of your mouth. Whereas the Russian-Swiss federation deliver extremely bitty and broken music in your box of groceries, this ‘Gezeugt’ has a solidity and continuity that is very satisfying; they don’t vary what they’re doing too much, and thus sustain the membrane of this watery balloon which floats over the swampy surface. On the other hand, the changes they make may seem imperceptible, yet they are also profound and effective, moving the listener from one place to another by means of telekinesis. The “ambient” sound of the audience chatter adds a lot to the package too, unless that’s sourced from found tapes lurking in Anne-Laure’s box. These names are all new to me, but this is impressive work; to hear more of them, you may want to look to their assorted band projects, such as L’Ouvreuse, Kaulquappen, Wing in Ground Effect, and Polder. From 16 May 2018.