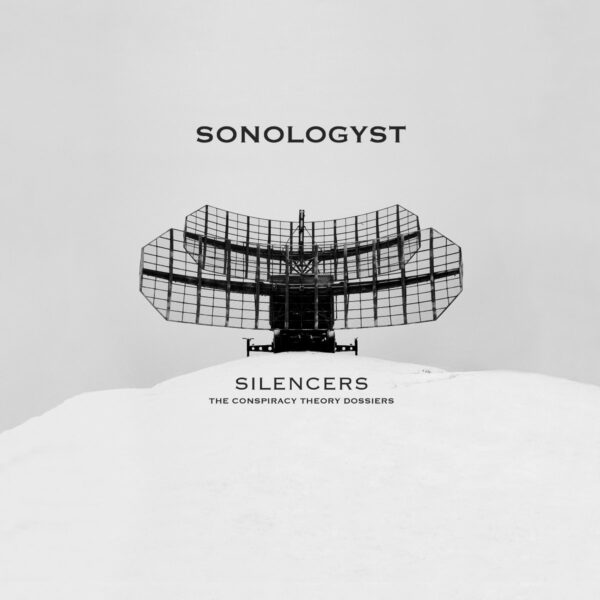 Sonologyst is the Italian musician Raffaele Pezzella. He runs the label Unexplained Sounds Group, which Jennifer Hor recently nominated as a new personal favourite on the strength of its compilations of contemporary Middle Eastern sounds. Actually Unexplained Sounds Group appears to be more than simply a label, as there’s also a radio show and a blog maintained by our man Raffaele in pursuit of his world vision. He’s here today with Silencers: The Conspiracy Theory Dossiers (COLD SPRING RECORDS CSR253CD), most of which is pretty good unsettling drone music and vaguely puzzling chilling, atmospheric sound emanations.

As to his technique, Sonologyst does have a line in spare, washed-out tones which is unusual and distinctive; he doesn’t feel the need to cram our ears with thick and foggy drone-clouds, and there is a noticeable amount of air and space in each spine-tingling composition. At all times he does his best to sustain this tense mood, even if the compositional method isn’t very well defined. As to the theme of this album, Raffaele himself is a very convinced UFO / extra-terrestrial believer, and although I haven’t read his blog posts I would suppose his writings present numerous anecdotes and evidential screeds to further his cause. Specifically on Silencers, he concentrates on the idea that government agencies – in all probability American agencies – are spending a considerable amount of tax dollars in covering up the numerous UFO and alien sightings that have been blighting the world since Roswell, and the unspoken subtext of Silencers is all about the “Men In Black” who are tasked with erasing our memories. I’m surprised how much mileage Raffaele has found in this particular trope, since it’s long since passed beyond the point of satire and comedy – not just the high-profile yak-a-minute movies MIB and MIB II, but also The X-Files TV show (which always had a tongue-in-cheek aspect anyway) and probably parts of David Lynch movies too. There’s even a humourous rendition of one of these agents at the end of the first Incredibles Pixar movie. 1 It’s possible Sonologyst is waiting for his chance to be asked to provide the ambient musical score for that movie that finally dares to take the subject a bit more seriously.

He evidently takes the subject pretty seriously himself, if the enclosed seven-page booklet is anything to go by; not a hint of irony in his words as he solemnly recaps the history of these mysterious “silencers” and their activities, describing the patterns of their behaviour as if quoting from a civil service pamphlet on the subject, and taking every wild claim he’s read as veridical fact. 2 However, the listener can put this UFOlogy aspect to one side for the most part, as the music is almost all abstract and non-specific mystery-drone music, apart from a track near the end called ‘Secret Societies: The Kennedy Speech’ which samples some apparently genuine recordings of Kennedy-era White House flunkies giving their “testimonies” which may or may not prove that JFK had knowledge of the entire MIB program, or secretly knew the very facts that NASA and the CIA were trying to cover up, or something. I single this one out as it has an urgent, paranoid tone which is lacking elsewhere on the album; the hurried pace of the queasy electronic music suggests that civilisation itself is hurtling towards some horrifying conclusion, and that most of what we thought we knew is completely wrong. There’s also something to savour in the sampled voices, the bland, self-serving manner in which these uptight white-bread Americans hold forth in clipped tones; you can almost see their buttoned-up white shirts constricting them.

Cold Spring Records have released similar dark ambient records with paranoid alien themes, such as Sleep Research Facility’s Stealth and Schloss Tegal’s Oranur III (both releases backed up, I seem to recall, with similar quasi-scientific “research” in the accompanying printed matter). From 14 May 2018.