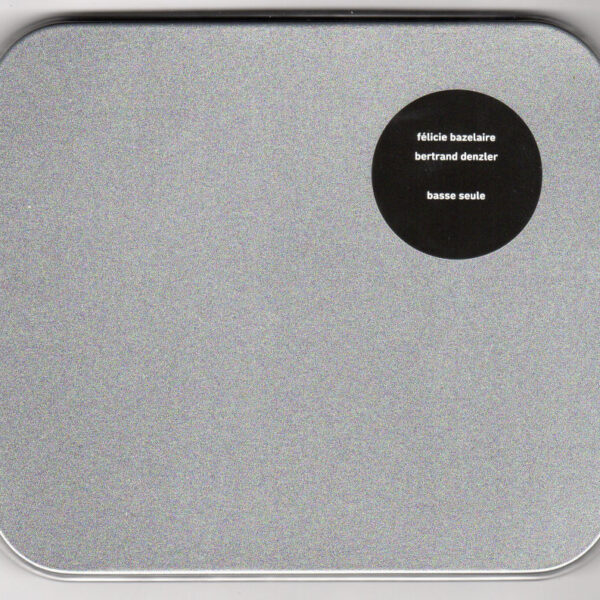 French genius Bertrand Denzler often appears in an improvising context, but he has great compositional skills too, and the latter is what we experience on Basse Seule (CONFRONT ccs 89), a suite of nine pieces played by Félicie Bazelaire on her double bass. I hope I’ll be forgiven for perceiving this as one long piece divided into nine sections, as the work is so much of apiece and the pieces are so similar; to put it another way, it creates a glorious monotony, sluggish and slow-moving deeply resonating bass tones sawing away in an implacable manner. It creates the impression for me of living in a lighthouse for eight weeks, slowly going insane from solitude, and from enduring the sound of the grey ocean waves outside, not to mention the creaks and groans of the lamp, which probably needs oiling, and I don’t know how to do it as I’m not really a lighthouse keeper.

Apparently Denzler’s compositional method firstly takes into account the physical aspects of the instrument itself, so he must know something about the workings of this monstrous hunk of wood and string in order to generate a scored event from such knowledge; and secondly it acknowledges the “reality” of a solo player playing alone, which again is another aspect of music-making that depends on experience and knowledge, hard-won by years of doing it for audiences or playing in cold, unlit studios. One might say on the one hand that both of these strong components are somewhat “reflexive”, self-conscious designs based on things which other composers would either take for granted, or find simply trivial. On the other hand, they probably amount (for Denzler) to irreducible truths about the material world, and as such are legitimate materials for adding to his lexicon of musical composition. Probably when we hear this music we are experiencing a metaphor for some other irreducible truth, such as the chemical construction of amino acids or such like. I’m mainly interested in the “solitude” dimension, the thing about playing solo, the fact that the word “seule” is important enough to form part of the title; it seems to confirm my instinctive guess about the solitary lighthouse-keeper thing.

Bazelaire, who is also a member of ONCEIM and played on Denzler’s Morph record in 2015, throws herself into this difficult task with the patience and perseverance of a sawmill owner who has been tasked with cutting up lumber with a blunt table knife. We could speculate, if so inclined, how Joëlle Léandre might have approached this commission; I suspect she might have added one too many personal flourishes and stylings to her playing, whereas Bazelaire does it with restraint, a certain faceless anonymity, and a depersonalised air. This approach evidently suits the work in question. Whichever way you look at this, it’s a triumph of composition and performance working in tightly-locked harmony. Excellent!!! (16/05/2018)