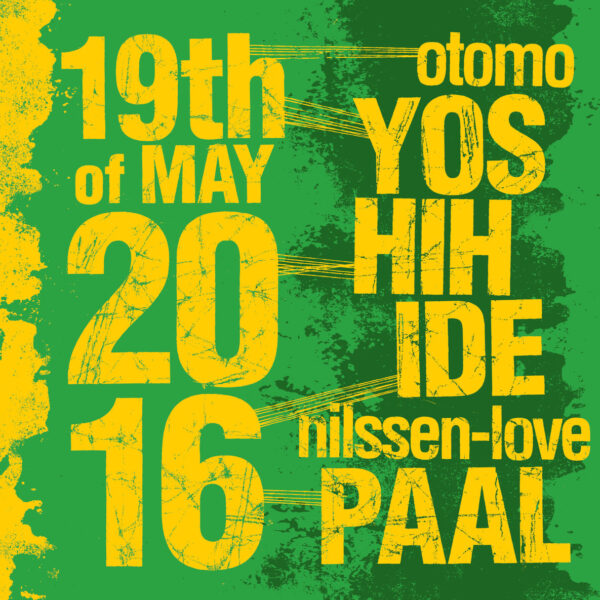 I’m glad to get my hands on fresh music by the great Otomo Yoshihide, as I don’t seem to have encountered a new record from him for many years. It’s also great to hear him on the electric guitar, which (we are reminded) was always his first instrument, despite all the pyrotechnics he wrought with turntables and big bands, and his more restrained work when he pioneered minimal synth tones as part of Filament (and pretty much “invented” Onkyo). Still can’t decide if I’m as overjoyed with 19th Of May 2016 (PNL RECORDS PNL039) as I’m evidently expected to be, even though these two live performances with drummer Paal Nilssen-Love are strong and exciting. I didn’t even know these two fellows had formed a connection, but they have – there’s an earlier LP than this on from 2014 on Jvtlandt which looks good, and Otomo has also joined the drummer on tour with The Thing band.

Given Nilssen-Love’s predilection for “energy” music (where the sweat and vigour seem to be privileged over everything), it’s perhaps surprising how many subdued and subtle moments there are on this record. The 17-minute ‘Cat’ may start out with a rush of electric adrenalin worthy of Sonny Sharrock slugging it out with Han Bennink, but there’s a long section where everything appears to droop suddenly and settle into a cold, reflective, uncertain zone of tentative noises. Matter of fact this is the material I’m savouring the most on this record. Otomo is making noises with that guitar that no man has a right to do; he’s performing the role of double bass (incredibly deep notes) and somehow duetting with his own acidic, stringy high notes that are laced with angst and pain. Drummer PNL exhibits an impatience to get back on the road again with his paradiddles and rattling actions that are somewhat inappropriate; leave Otomo be and let the man brood, if he wants to brood, would have been my advice.

The second piece ‘Dog’ also kicks off with powerhouse kicks and punches, and the opening five mins are enough to satisfy any listener’s thirst for high-volume rock-inflected freeform antics on the six-stringer. After this we’re soon back to the brooding zones, as Otomo effortlessly exhibits his “extended technique” if you want to call it that, experimenting confidently with echo devices, feedback, pure noise, and heart-rendingly forlorn notes. At the same time he’s instantly composing a fugue of repeated notes that would make any musician climb into a top hat and curl up for the night, throwing up the sponge. Some ten minutes of juicy noise later and I’m prepared to allow PNL back into the fold, even though by now he seems vaguely disaffected and not so much engaged with the performance. After this cold and uncertain spell, it’s a more conventional rock-out Sonic Youth channelling Ted Nugent styled ending to the show, which ought to satisfy most concert-going truffle hounds.

Well, it’s clear to me who wins this bout; Otomo invests every second with genuine and deep emotion, even at the expense of musical coherence, and he’s always prepared to derail the train when the occasion demands it. It reminds me that Otomo received some tutelage I believe from Masayuki Takayanagi, a Japanese titan of the instrument and one whose work and ambition was too gargantuan to be contained by the genres of jazz, free jazz, noise and improv (though efforts were made). Conversely Paal Nilssen-Love has passion and force, and of course admirable percussive chops, but less emotional range somehow. Even so, this is a rare event captured on the disc. Packaged in “mini-LP” gatefold cover with pastedown artworks…from 21 May 2018.