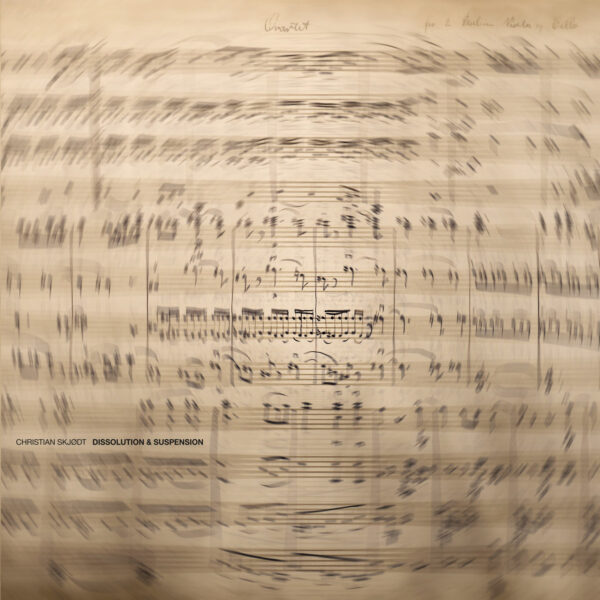 Danish composer Christian Skjødt was last heard in these pages with his 2014 album Works Of Uncommitted Crimes, which we quite enjoyed with its layers of ebows and oscillators vying for space with a resonating auto-harp. However Illumination, process music derived from solar information, was much less rewarding. He’s here today with Dissolution and Suspension (TONOMETER TONOM173) which, like both predecessors, is pressed in transparent vinyl; he may be trying to tell us something about the “spacious” nature of his music, aspiring to emulate the condition of a huge piece of plate glass such as might be used in the construction of a modern cathedral.

This work is a kind of deconstruction of classical music’s past; he’s started with a string quartet composed by fellow Dane Carl Nielsen and rethought it as electronic music. The method is not crystal clear from the enclosed notes, but I think it was realised by sampling numerous recordings of string quartets playing Nielsen’s Opus No. 5, and subjecting them to what Skjødt describes as “advanced audio analysis”. Through separation and playback through a four-channel PA system, he hopes to achieve a spatial grandeur which Nielsen (with his reliance on old-fashioned nonsense like harmony and rhythm) would probably have never imagined, and allow us to savour the granular detail of these resonating strings. Instead, two sides of rather tedious slow drone result. Over-processed into digital mush, the music provides no end of competing frequencies to tickle your ears, but very little detail or clarity. I listened in vain for a concrete moment, a musical event, to anchor my brain in some form of reality; and was instead provided with music which amounts to the world’s longest provisional sentence, a string of ifs, ans, and buts, an endlessly deferred conclusion.

While I’m not steeped in late Victorian classical music from this country, at least you can say that something is “happening” in Nielsen’s original work as you listen to it; Christian Skjødt instead presents us with an unengaging sense of complete stasis, mired in digital tapioca. Somebody, please withhold his digital delay unit until he learns to be more responsible with it. From 19th March 2018.