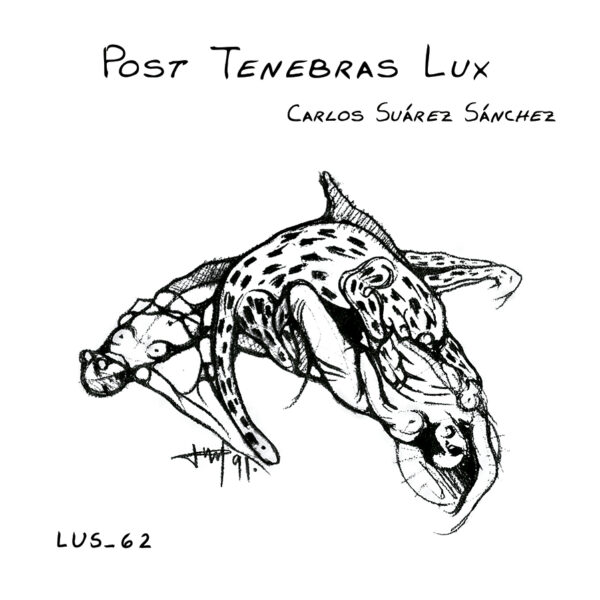 Spanish composer Carlos Suárez Sánchez came our way on the Cuculacanto record which he made with Xedh in 2012. We noted then the credentials of Sánchez as an ethnomusicologist, confirmed by the lengthy periods he has spent in Venezuela, his research for The Folklore and Ethnomusicology Foundation, and his publication Los Chimbángueles de San Benito. Post Tenebras Lux (LUSCINIA DISCOS LUS-62), his second record for Luscinia Discos in Granada, does (I venture to say) continue his preoccupations with the Afro-Venezuelan culture in which he has been steeped since 1989, a supposition I make mainly based on the cover drawings – the jaguar on the front cover is pretty powerful, likewise the crucifix on the back.

Musically, Post Tenebras Lux is all electro-acoustic, mostly low-key musical drones of a sombre nature, with occasional field recordings and even a poetry recital (by C.E. Ferreiro). Sánchez’s work is good, but stops short of greatness; I can’t help feeling he’s in awe of the subjects and mythologies he wishes to convey, but can’t find a way to express their force adequately. The music is often subdued, the pace incredibly slow, the mood tense – as if everything is poised on a knife-edge where something dramatic is about to come our way, but we never get the promised pay-off, be it a raging storm or a violent death in the jungle. I’d just like to hear more concrete events, rather than a series of strange atmospheres.

This isn’t to deny the variety of sounds and timbral effects, nor the evident care with which Sánchez has assembled his compositions. From 13th July 2018.