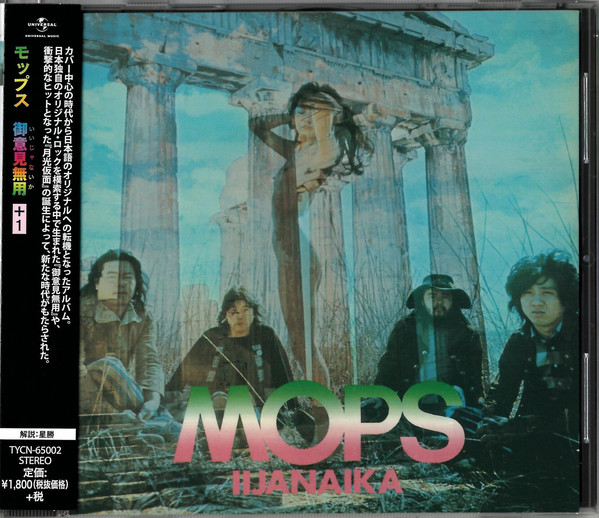 Founded in 1966 by high-school students, Japan’s The Mops originally were a garage rock band in the style of their heroes, US instrumental / surf rockers The Ventures. On the suggestion of their manager, The Mops later adopted a psychedelic direction and released their first album in this style in 1968. Rock and pop music tastes and trends changed again, The Mops changed their style and their record label, and by 1970 had become a blues-influenced hard rock band that, paradoxically, combined a deranged edge with a desire to please listeners by covering amazingly schlock-rock pop numbers in case the rugged stuff might be too much for sensitive ears.

Third album “Iijanaika” epitomises the multiple-personality identity of the band well, with the first couple of tracks being typical hard-edged blues-rock stuff featuring distinct riffs and extended guitar runs. The minimal style of the music reveals a lot of space within and makes for quite relaxed easy listening. “Good Morning, Good Afternoon, Good Night” seems like lighter-than-fairy-floss lounge pop initially but there is a slight off-beat feel that makes the song a little bit darker than what the band might have intended. It’s only when we come to “Gekko Kamen”, the first song on the B-side and the only one entirely in Japanese, that we discover the band’s true hidden identity: the song bounces from melancholy blues rock to flamenco to a manic conversation in Japanese that might have come from a loopy sitcom or comedy variety show. While short, this song more than repays the suffering you may have to endure on the rest of the album. “Trace of Love” is competent hard rock but the musicians sound as if they’re on autopilot playing this song. “To My Sons” adds a trumpet and a cheesy organ for that Latino desert Western ambience. “No One Knows What They Were” is a last gasp of psych-influenced hardness and flashing guitar soloing.

Had The Mops been advised at an earlier stage of their career to play whatever they wanted, and not worry about keeping up with trends, they might have been less successful during the time they were together (1966 – 1974) but their music would have had a more individual (if crazier) identity. As it is, this album is quite patchy in parts and the musicians’ inner maverick spirit finds release in too few songs. When the guys release their genie, they’re very, very good but when they have to bottle it up again, the spirit departs completely and what remains is dutiful filler.