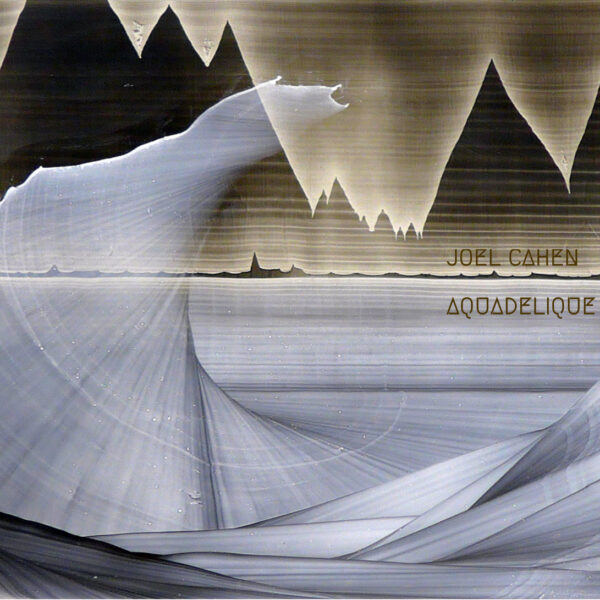 Aquadelique (ADAADAT ADA0055) is an unusual watery item, ambient music designed to be heard while the listener is under the water. Joel Cahen, an Israeli-born London-based sound artist, has created a number of suites combining dreamy electronica music, drones, and disco beats, fed through filters and effects pedals of various sorts, and arranged in extremely non-logical abstract sequences. As a record, it’s not unenjoyable, and I suppose the optimum way to experience it would be while we’re immersed in water. The press release is at pains to point this out, based on two physical facts: (1) we “feel” sounds through the body rather than through the ears when we’re submerged in the good old aqua pura, and (2) water is a more efficient carrier of sound than the air.

This latter fact has come up now and again in critical music discourse, and I seem to recall it was mentioned by Gavin Bryars when discussing his work The Sinking Of The Titanic. However, Joel Cahen has been doing this in the real world for some time now, at a series of events called “Wet Sounds”. Those who participate in this entertainment climb into a swimming pool, where they can experience these musical and aural projections “above and below the water surface”. Matter of fact there are also light shows to enhance the multi-sensory dimension of it. When it comes to introducing sound and music to unexpected places, Cahen has form; he’s previously done it in art galleries, libraries, theatres, and at something called “Scrap Club” which involves engagement in “public destructivist activity”, which sounds rather alarming. Although Aquadelique feels compositionally weak and unfinished as an album played in your living room, I expect it makes a lot more sense if experienced in the totality of the setting described above. From 13th August 2018.