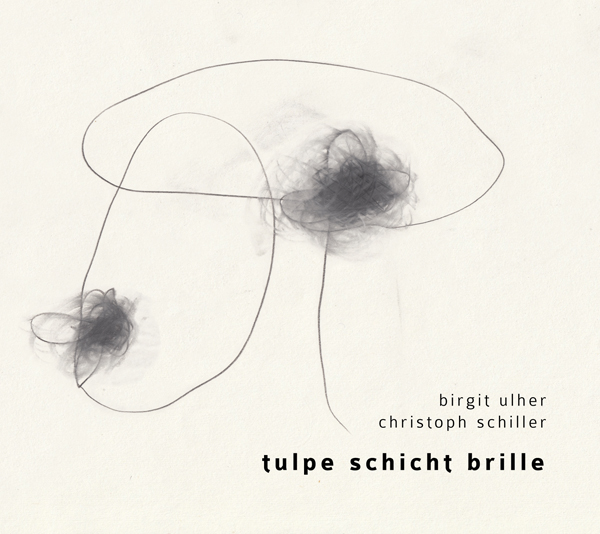 Birgit Ulher and Christoph Schiller are here with Tulpe Schicht Brille (INEXHAUSTIBLE EDITIONS ie-011), a fine set of reduced playing made in unusual fashion. We last heard Ulher doing her trumpet and radio thing on Radio Tweet, where she did it with Ute Wassermann. Ulher’s tabletop also carries a speaker and various objects, and her performances are filled with small intimate events complementing her very compacted trumpet playing. Each puff on that instrument seems very constrained, but it’s still very expressive; one thing I like is that she doesn’t feel the need to call attention to her breathing, which is something Axel Dörner used to do rather a lot. Ulher produces mysterious growls and purrs which feel very natural, and we’re not getting yet another lesson in extended technique.

Composer and keyboard player Schiller has appeared on quite a few records from Another Timbre and Creative Sources Recordings, and indeed recorded with Ulher in 2012 on the Kolk album for Another Timbre. Along with his electronics and objects, he plays the spinet – an instrument which rarely crops up in an improvising context. The baby sister of the harpsichord, it involves plucking a string with the key rather than hammering a piano wire, and the sharp tone it emits is something you could use in place of dental floss. While I suppose the spinet may have featured on many florid recordings of baroque music, Schiller’s playing here is anything but florid. He will only surrender a note on very strict terms, it seems, wishing his contribution to be felt with the clean sharpness of a needle entering your arm.

Tulpe Schicht Brille thus offers some very unusual sound combinations, and at their most effective the pair create (in a very low-key manner) something that’s almost alien in its unfamiliarity. There’s a certain coldness and stiffness to the performances, but if anything this only adds to the overall effect. From 15th October 2018.