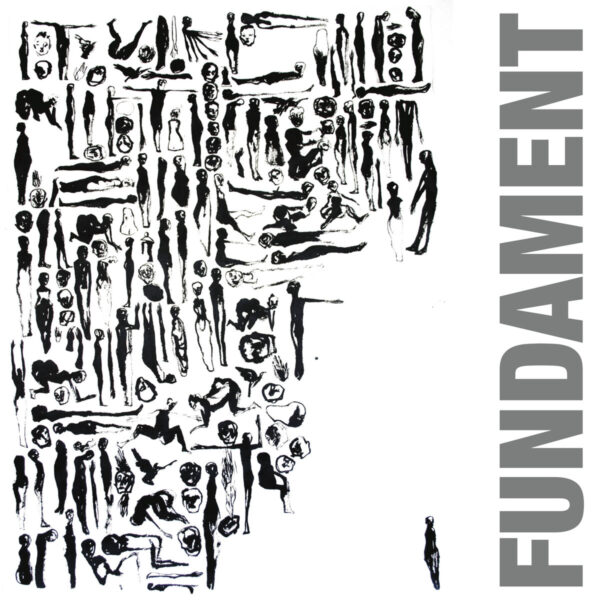 Large number of improvising Europeans foregathered on Fundament (EL NEGOCITO RECORDS eNR068), a record which (on the CD spine, at least) is credited to bass player and vocalist Peter Jacquemyn. All the musicians play one form or another of lower-register instrument, by which I mean something that generates deep bass rumbles and growls, and furthermore everything is acoustic; if you want a shopping list of these deep Dans, there are two baritone saxes, one bass sax, two tubas, a trombone, a tubax, and five double basses…enough low frequencies there to cause a small earthquake, or at least open a few cracks in the ceiling. Just think if they had a cathedral organ in the mix too. But then that would disrupt the point of this work, which is to do with group playing – a fact emphasised by the photo on back showing all these guys of the Fundament Ensemble massed in a huddle. The note inside uses the word “corporeal” to convey this notion…if we listen correctly, we should be getting the musical equivalent of a grizzly bear hug.

They do it across two long tracks ‘Fundament a’ and ‘Fundament b’, the first of which delivers slow heavy drones by the metric tonne, while the second has more dynamics, pauses for space, agitated murmurs, and allows the double bass guys to get a bit of bowing action in. Both pieces are great stuff, even if they do at times hark back to “old-school” improvisation from the days of Incus and Ictus, when a white European guy could stand on stage and whale the atonal tar out of his chosen weapon. In particular I’m thinking of records like Circadian Rhythm or any given group-puffing session involving a lot of brass. Fans of slightly more conventional free jazz might enjoy the short (1:48) ‘Blow’ on this CD, where the saxes and trombones get a bit of solo time and dish out a blurtish scree quite at odds with the more deliberative long workouts; meanwhile the holy minimalists among you will appreciate ‘Earth’, the closing track where all the players do the voice-based drone thing and issue a fairly ordinary throat-singing episode, not far apart from Yoshi Wada’s swimming pool experiments. Not bad, but Phurpa have pretty much cornered the market in this sort of thing these days, and are more convincing with the spiritual depth of their vocal intonations.

Of the ace players on display, only Carl Ludwig Hübsch is known to us; he’s the tuba meister who appears in many improv forays, and was last heard here on Metal Breath with Phil Minton. Jacquemyn is credited here with the “concept” of Fundament, a dimension of this project which I haven’t tried to engage with as yet; try reading the note by Gerd Borms and see how you get on, but any essay titled “The vibrancy of air across space generated by sound bodies” is a stumbling block for me personally. From 26th October 2018.