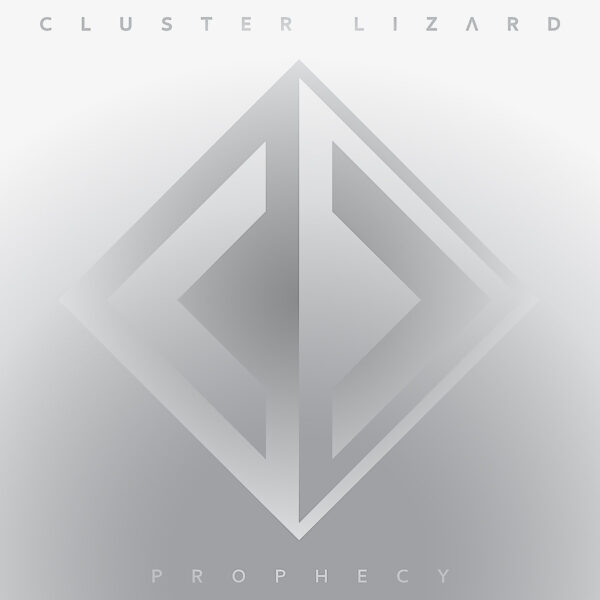 Dmytro Federenko and Kateryna Zavoloka are the Ukranian electronicists who now reside in Vienna and not long ago (2018) joined forces to become Cluster Lizard, and as such they released the pessimistic outer-space record Edge Of The Universe. They’re here today with Prophecy (PROSTIR + 1), the debut release on the new label Prostir which they have designated as the imprint for the Lizard’s output.

Gorgeous outsize card cover for the CD, printed with a silver overlay and showing their “emblem” under which they clearly intend to enslave the human race. The track titles inside, also embossed in silver type, are like tiny essays; they read like fragments from a lost book of the Bible, resplendent with foretellings of terrible events and doomy scenarios, couched in a rather vengeful language that makes us fear for our own safety in the new universe; the creators put these texts together by sampling and mixing literature and poetry from William Blake, Lord Byron, Rimbaud, and other writers (presumably from Eastern Europe). The music is well-produced experimental techno, leaning on the heavy side with its ponderous beats and single-minded repetitions, given that extra depresso-edge by the dismal melodies, some of which sound like the anthems of the Lizard People which we will all have to learn by heart when these simians get their way. When the music is not trumpeting a fanfare of triumph over us downtrodden ones, it hisses out a track like 03 – ‘Fighters of the Fight…’ (look up the full title elsewhere, if ye so wish) – which I enjoy for its creepster sensibilities, its darkening emotion, minimalism made even more minimal, much snake-like hissing and writhing of scaly bodies on the battlefield.

Both Federenko and Zavoloka always give me hope that avant-techno has much potential as an art form in its own right, and can be just as expressive as the lush progressive rock of my youth. They certainly have the technical prowess to make it happen, if anyone does; this record, like many of theirs, boasts an immaculate production and sharp digital surface where the “lines” are so hard-edged and clean they almost seem too good to be true, untouched by human hands. From 16th November 2018.