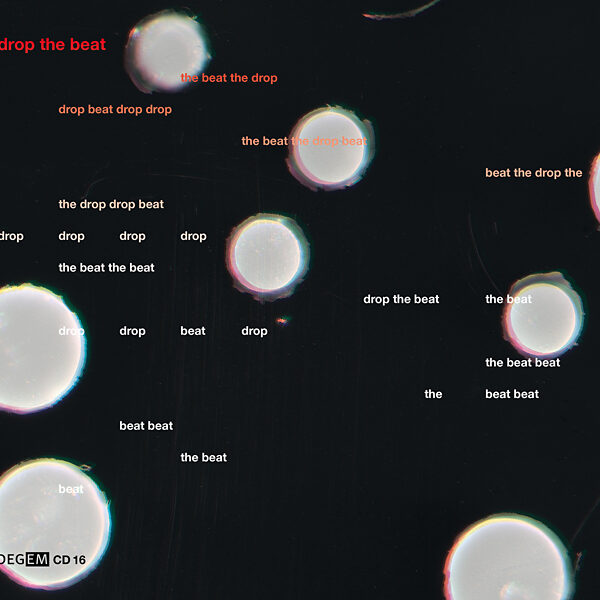 Drop The Beat (DEGEM CD 16) is an edgy compilation from Edition Degem compiled by Felix Leuschner (of CLUBbleu), featuring some occasionally far-out electronic music by European beeplers, most of whom are not familiar to me apart from Marc Behrens. “Which significance does rhythm have for us?”, begins a screed of challenging texts which appear to have been the guiding watchwords and bye-laws for this comp, going on to ask “How much time do we spend on rhythmic organisation while composing?”. I think the general idea is to subvert our familiar notions of what techno and electro-disco might constitute, but beyond that I’m not sure what new musical frontiers are being opened up by this ill-fitting selection. Haven’t we already been through this particular identify crisis moment with the Mego label some 19 years ago?

My preference runs to the more extreme examples of abstracted, puzzling noise – in which class I would place Alex Hoffmann and his ‘Tight-interlocked oscillators’, and the monotonous thumps of Kai Niggermann with ‘The Pretty Blaze’. Kinda like Stefan Schulzki’s ‘Test Run DFAM 13’ too, but it’s not especially unusual – just a sequenced rhythm pushed through various mixing desk filters. There’s also Michael Harenberg with ‘M-Medusa’, again not especially challenging or different, but it’s in the general area of black-minimo techno nightmares not unlike recent offerings from the Austrian Ventil label.

Digipak contains extensive booklet of artistes’ annotations, explaining their intentions and methods. Patchy, but some moments of frisson can be thine. From November 2018.