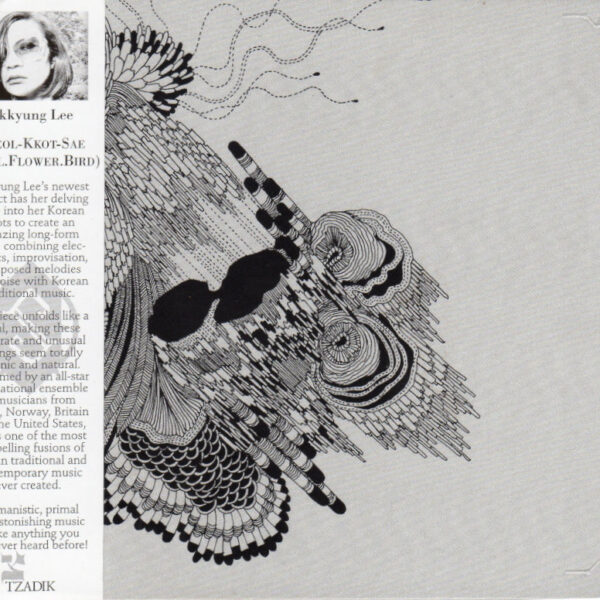 Since moving her worldly goods to New York in 2000, the name of South Korean cellist/composer Okkyung Lee can be found on numerous, well-received left field/experimentalist albums. Solo and collaborative projects abound with Laurie Anderson, Ikue Mori, John Zorn and Chris Corsano among the cast of avant-glitterati. But as to the inspiration behind this release, we need to head baclk to the nineties. During her time at Boston’s Berklee and N.E.C., a rediscovery/re-evaluation of her Korean roots leaked into her frontal lobes when, during those occasional solitary moments, she found herself hum/singing a number of traditional songs from her homeland.

This re-emergent part of her DNA has now become one of the major components of this disc, alongside other left-of-centre applications like synthetics, improv and hairy-palmed noise. Now, instead of employing hired hands solely from the U.S., Okkyung has instead chosen to hoist the flags of many nations, with musicians from Europe, Scandinavia, S. Korea and the States responding to the call. “Cheol…”, a commissioned work for the 2016 Donauschingen Festival in Germany, finds Ms. Lee’s organisational skills bang on the money. After all, bringing together six musicians from distant corners of the globe to one place and at one time must’ve been as easy as herding cats. However, things have certainly clicked into place with this live recording, captured before a surprisingly quiet and restrained audience.

Aside from “Cheo-Wood/Mirrors”, a poignant instrumental tribute to the tragically murdered Labour M.P. Jo Cox (and the most linear composition on show), all roads lead to the title track; the disc’s six-part, long-form centrepiece, which sees all of the sextet getting a fair shake of the musical stick. London’s improv mainstays John Edwards (double bass) and saxist John Butcher certainly make their presence felt mid-proceedings with the former turning his now strangely malleable brass beast inside out, doggedly searching for the mystery note, while the latter’s bull-fiddle adopts a singularly full-bodied tone with those extra buzzes, whirrs and scrapes all rightly demanding equal ear-space. Lasse Marhaug‘s noisist tendencies meanwhile, remain loyal to the noble cause and range from fox-in-the-aviary hubbub to recreating a housefly’s noisy and erratic trajectory after inhaling deadly Vapona fumes. And… as au fait with slinky world jazz forms as she is with high-pitched trills, that battle with Okkyung’s cello skree, Sung-Hee Kwan‘s “Pansori” singing (a Korean story-telling device, performed by a singer/drummer duo), is heavee on the larynx wobble. Her extended vocal lines sounding as if they’re being topped off with over-zealous applications of the Heimlich manoeuvre. A style that’s as disarming as it is refreshingly divorced (decree absolute) from received forms of femme voice projection.

The accompanying promo lit states that its shamanistic, primal and astonishing music is unlike anything you’ve heard before! (emphasis theirs). Well, I do get fleeting impressions of a pocket-sized Yma Sumac fronting a Rohan de Saram-era AMM… but all things considered Tzadik’s back-room scribes might well be on to something here! (emphasis mine)…