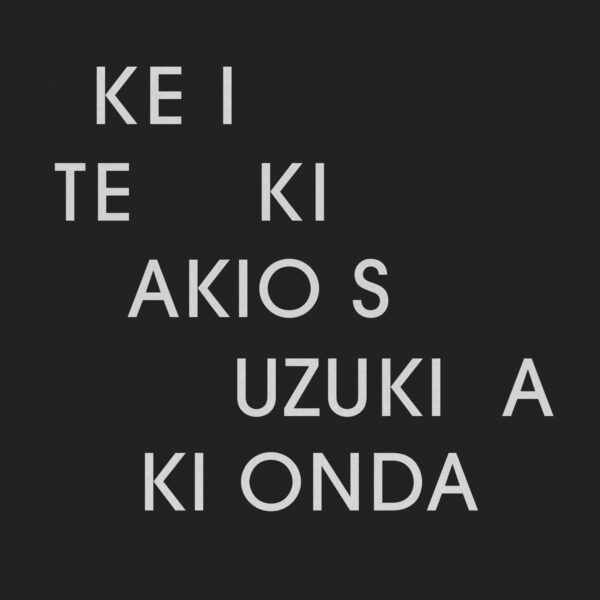 Superb team-up by a couple of Japanese “grand masters” of free playing and sound art, if we can use such hyperbolic terms without getting too gushy…the album Ke I Te Ki (ROOM 40 RM499) was recorded by Akio Suzuki and Aki Onda, and it’s three long tracks of incredibly exciting (though understated) music that is packed with surprise and incident (while remaining focused, clear, transparent). Aki Onda is the cassette tape genius who can do things with humble ferric oxide that at times seem like magic – it seems ages since we were sent South of The Border on Important Records (from 2012), and his Ancient & Modern CD from 1993 is something you will have to pry from my dead fingers if you want to get a copy. Akio Suzuki is a maverick instrument-inventor and player whose career goes back some forty years now, and is usually spoken of in reverent terms by anyone lucky enough to have played alongside him. Hard to believe they got him to come to the UK for Company Week in 1982.

Well, it seems our two friends have been playing together regularly for five years now, and here’s a document of something they did in a loft space in New York City in 2015. According to the notes I have before me, it’s all about the performing space with these two – they respond so completely to the acoustics of the environment that they claim “we don’t usually hear the sound sources as they actually are”. Natural echo, acoustics, sounds bouncing back, reflections, the dying fall as a sound winnows away into nothing. Just to hear them speak in this unassuming manner makes me think I’ve been walking around with wax stoppers in both ears for most of my life…they extend this philosophy into the choice of performance location (it must be a very open space, no stage getting in the way for them), and they like to let the audience surround them. When they got to the NY loft space in Soho owned by the Emily Harvey Foundation, we’re in an exciting position where “microphones were everywhere” and sounds are diffusing across the entire space. To boil it down, it’s two artists getting in tune with the environment in a special way; it almost seems like the preparation is every bit as crucial as the performance.

As to what we hear them playing, that too is pretty unorthodox (and very hard to describe); we could mention that Aki Onda was playing tapes of field recordings, creating drones with a fan, and producing electronic tones from radio sets; while Akio Suzuki played his stone flute, his Analapos, and found objects. That doesn’t begin to account for these mysterious, alien atmospheres, charged with tension and stark conflicts, precious and beautiful as rare flowers or extinct animals and insects at play. ‘Hi Ka Ri’ is one personal favourite mainly because of the welter of loopy voice sounds and breath effects in among the kaleidoscopic array of rattles, drones, grinding racket, micro-tunes and subtle ever-changing resonances. It’s also fundamentally noisy and insistent. You might prefer the title track ‘Ke I Te Ki’, which is on the gentler side, but creates a more compelling exotic landscape, a dream world, lights and colours never seen by anyone outside of a supernatural dream-odyssey, yet produced by such simple means. How does it all work? Both these geniuses know exactly what they’re doing, and are proud of their “unconventional style”.

Even the title is part of their plan; from Japanese, it translates roughly into a warning siren of some sort, and they used this conceptual device as an admonition to themselves to go further, grow wilder, and never settle for anything ordinary. “No determined limit or boundary” is indeed their motto, and we can only sit back astonished at how easy they make it look. I can’t imagine how the audience in New York felt, but personally I’m in paradise; we’ve got one hour’s worth of unmitigated brilliance right here, miracles gently unfolding in real time. Just great! From 19th November 2018.