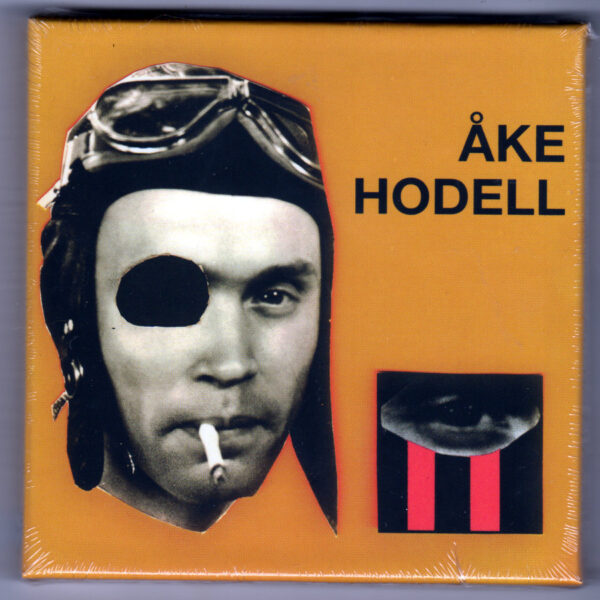 For listeners who enjoy sound poetry with a strong political edge, this box set of Åke Hodell’s 1960s and 1970s recordings was remastered and reissued this year. Below is a review from The Sound Projector 9th Issue (2001), co-written with Chris Atton.

This triple CD collects Swedish sound-artist Hodell’s compositions recorded for the Swedish Broadcasting Corporation from 1963 to 1977. Some have noted that Nurse With Wound / Steve Stapleton may have copped a move or two from Hodell. Not just the music, but the air of surrealism, the use of horrid treated voices, and the making of unsettling collage artworks (of which some choice samples are reproduced in the booklet). What impresses me here is that, unlike most sound and voice collagists (Henri Chopin being an exception), there is an obsession with a minimal use of materials, both in terms of density of sound and in repetition. There is much repetition here, if not literal (as in the opener to Brainwash, with its mind-numbing army marching and its sergeant major’s relentless ‘1,2,3,4’) then at least formal: the entire musical material of ‘Structuren’ comprises artillery and aircraft weaponry from the two world wars, presented in chronological order of deployment. At times we are offered the opportunity to hear each sound in its own space, never are we in any doubt as to what we are hearing – the soundscape is never too crowded. The consequence is that we, like the composer, are directed by the structures to reflect on the content of each piece. This is especially effective on the first CD, from which the above examples are taken. Antimilitaristic, passionate, yet detached. Brutal, provocative, but with none of the hysteria that makes, say, Lettrist performances so unlistenable.

The second CD contains a series of lengthy, impressionistic works collected under the title ‘Purgatory.’ These demonstrate Hodell’s skill at creating what he termed ‘text-sound-compositions’, where his speaking voice is cut up amongst a restricted palette of musique concrète sources. The sounds of a ferry, crows and primitive electronic transformations accompany his haiku-like poetry on ‘The Djurgården Ferry across the Styx’ to produce a mantra-like vision of Hell, created from the most mundane of materials. An odyssey it seems, a flight through memories and imaginary spaces, the black bird of ill-fortune carrying some fateful message across the centuries. Maybe the human race is doomed. Hodell’s voice recites a litany of gloom, ending phrases with his repetitive ‘Kraa-Kraa’ utterance, juxtaposed to the sample of the Crow’s caw.

‘Cerberus, The Hellhound’ is likewise a journey into one of the nine circles of Hell. Nine? Hodell just added another fourteen to the Infernal Ringway…it’s partly rendered as a train journey, which is always an effective way to depict a 20th century Hades (just ask anyone who’s travelled on Network South East). The iron rulers of Hell bark orders; doomed imprisoned souls march along, double-time. ‘LAW AND ORDER!’ shouts a stern commander, while beaten-down wretches recite meaningless chants. Another voice calls continually for the destruction of ‘that place…tear the place down’, but unclear whether he’s seeking to raze the City of Hell to the ground, or one of our own earthly capitals. Either way, sound effects of bombs, sirens and crashing cars indicate that he got his way.

Two long tracks describe the ‘Electric Buddha’ project. ‘The Road To Nepal’ is composed of very abstract concrete tape manipulation, generating some extremely basic rhythms and drones; the tapes groan with agony, rather than sing with joy. Hodell makes little attempt to open up this claustrophobic landscape, the way the French School might do – he’s focussed on the utter greyness of his own sound. ‘220 Volt Buddha’, originally a musical stage work with slide projections, is a grotesque slowed-down tape of a voice. Organised into loops, it makes a mirthless moan against two notes of a percussion instrument. Then come waves of sluggish static noise, gongs sounding ominously, and harsh noises interrupting the melancholy like an unwelcome character in a Samuel Beckett play.

The final CD returns us to politics for the most: whilst the very English chanting of ‘Where is Eldridge Cleaver?’ in the piece of the same name sounds rather hackneyed , the mesmeric power of ‘Mr. Smith in Rhodesia’ – with its children’s chorus repeating the Nazi-like incantations of the main speaker (‘Mr. Smith is a good man’, ‘Mr. Smith gives us food and clothing’), at the same time as they are gradually drawn to the whispered subversive (‘Mr. Smith is a murderer’) – has perhaps even greater resonances in our own times, where so much of Hodell’s anti-Smith rhetoric can be equally applied to the Mugabe regime. Certainly, the dreams of freedom essayed in this piece seem quite hollow today. If ever tape collage was heartfelt without being maudlin or sentimentalized, this is it.