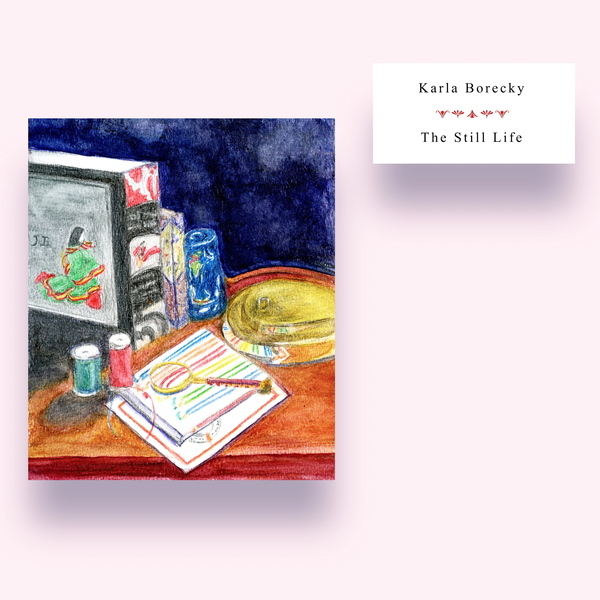 Karla Borecky has a new solo piano record The Still Life (RECITAL FORTY NINE), her second such after 2014’s Still In Your Pocket. Once again we have the pretty much plain and unadorned minimal production values, allowing us just to hear the sound of her piano, and the dynamics are added by the foot pedals. The 2014 album seemed to me poised on the brink of modernism, harking back to the more innocent times of 19th century Paris where the combined talents of Rousseau, Jarry and Satie promised much for the coming years. Here on The Still Life, Borecky exhibits two main modes – (a) small, intricate patterns, repeated notes played in a loop until the design is complete and (b) slightly more discursive themes where she branches out of the pattern-forming and starts painting a landscape. Everything is on a modest scale, and there’s not much in the way of compositional development, but that’s largely beside the point; each piece says what it needs to say, usually in less than three minutes, and then the next experiment follows.

The mood here, as before, is mostly rather sad and melancholic in tone, and Karla plays in a very unassuming, almost hesitant style. This isn’t to say she lacks conviction, as there’s a let of emotional truth packed into every one of these impressionistic pieces. While most of the tunes stay broadly on the same root note, exploring intervals within a simple two-chord range, I will single out ‘Honi Soit’ as a piece that bucks this trend and also tends towards the dark. There’s bold use of lower register notes and volume pedal, combined with a slightly “broken” series of runs that are far from the sweet and melodic mode that otherwise dominates. ‘Honi Soit’ could be Borecky’s attempt at some form of “acoustic noise”, in this context. There’s an overall ambiguity to this record that extends to the cover art, a painting by Borecky; foregrounded are some commonplace domestic objects rendered in a prosaic style with reassuring friendly colours, yet the background is a murky, uncertain purple abstraction. Home life may have its comforts, but what lies beyond is vaguely threatening. The album The Things I’ve Lost (FEEDING TUBE RECORDS FTR 279) was produced by Dead Girl’s Party, i.e. the duo of Matt Krefting with Scott Foust, the main man behind the Anti-Naturals conglomerate. We originally heard this when it was released as a cassette by the English label Entr’acte in 2010, and now here it is reissued on vinyl courtesy of Feeding Tube Records, the eclectic New England vinyl hub run by Ted Lee with Byron Coley cheering from the sidelines. “Combines droning synths, electronics, radio waves and guitar with vocal wailings, tending to convey a raw sense of desperation and futility,” I wrote at the time, noting the post-punk influences…on today’s spin, I would emphasise that it’s good to hear more of Foust on guitar, which he doesn’t do enough of since he bought his synths, and in spirit and abrasiveness this album harks back to his early band XX Committee, whose 1983 album Network is a near-lost benchmark of desolate industrial noise. I would also want to highlight the vocal interplay between Krefting and Foust, as evinced on most of the songs here but especially ‘Spin The Wheel’ and ‘Abandon Ship! / U-Boat Flu’. What we get is an exciting cross-cutting between declaimed poetry, harsh new-wave singing, and world-weary recits delivered in hoarse, resigned voices. This makes for a nicely disjunctive experience…like two political extremists barking out slogans on a platform, each trying to describe the crisis from a different point of view, and the words emerge as concrete poems.

There’s also much to recommend in the stark, bleak music; radio, electronics, tapes and keyboards all deployed to create chilling sensations of terror with just a few simple notes. The long song ‘The Things I’ve Thrown Away’ which closes the B side is interminable, but the tension is really something to savour as the same hopeless dirge is repeated over and over against a turgid musical backdrop. Ostensibly about sea-faring, but it’s plain that the despairing sailors who are singing this song aren’t going anywhere in a hurry. For some reason this strikes me as a distant cousin to a song Lou Reed never wrote for the first Velvets LP, almost like a sequel story to ‘Black Angel’s Death Song’. A welcome reissue for those who want a 21st-century update on everything from Gang Of Four to Two Daughters combined in one handy package, and given that the original cassette is quite “collectable” now, there’s no reason to pass this up.