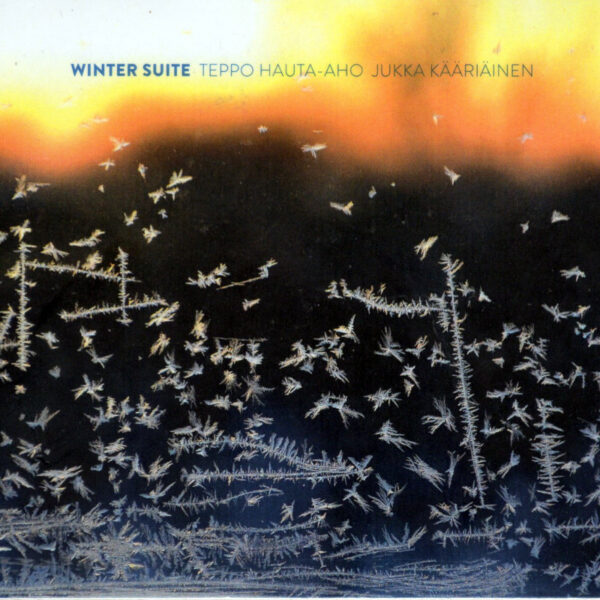 Now for some all-acoustic improvised music on string instruments played in the Finnish way. The team of Teppo Hauta-aho and Jukka Kääriäinen have made Winter Suite (CREATIVE SOURCES RECORDINGS CS 573 CD) and explicitly intend it to be heard as a “winter time” suite of music, depicting landscape and weather to be found in Finland at that most extreme time of the year. Bass player Teppo Hauta-aho is a renowned player and composer in this field – probably the most famous such player in Finland, plus he has played alongside such greats as Evan Parker and Phil Wachsmann. Guitarist Jukka Kääriäinen is from a younger generation and has played with Teppo as part of the Kalmisto Trio (with Kalle Kalima). With track titles here that refer to icicles, snow, rain, snow, and at least three varieties of ice (including the probably fatal “black ice”), you know that this is one record that requires a mug of cocoa and a roaring fire for full appreciation.

It’s perhaps unusual for free improvisation to opt for such literal and visual approaches in the music, especially when you think of some schools of thought who insist the music must be as abstract as possible, but this makes Winter Suite all the more enjoyable. My personal preference is for the slow, draggy and gloomy tracks involving much scrape and grind, a mode at which Hauta-aho is evidently a past master. I will use those grey grinders as a bleak soundtrack to next November, to hasten the feeling of seasonal affective disorder. Less keen me on the “jazzy” guitar runs from Kääriäinen when they appear; though sprightly, they feel a tad inappropriate to the mood; it’s like John McLaughlin suddenly surfacing from the middle of a frozen lake surrounded by rainbows from Vishnu. From 12th December 2018.