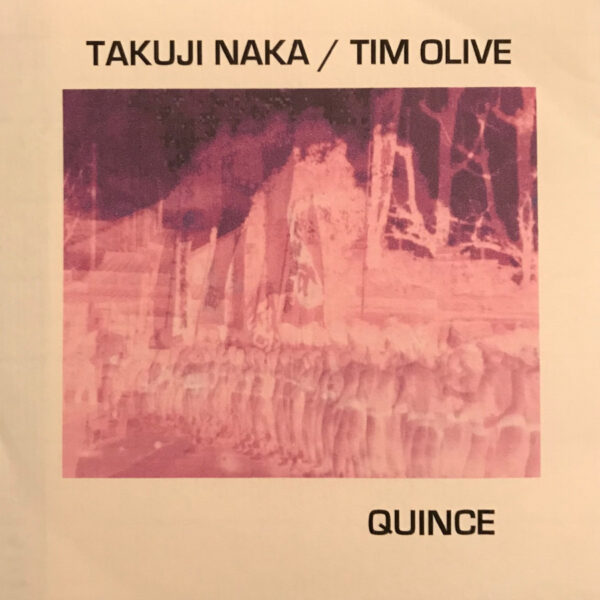 Got a couple of new releases from the ever-active Tim Olive, the Canadian player who’s always up for a duo or trio session with a like-minded player. On Quince (KENDRA STEINER EDITIONS #397), here he is with Takuji Naka, his sparring partner who’s appeared previously on The New Attractive and False Mercury. Produced with just tapes, electronics, and Tim’s magnetic pickups, we have a slowly-increasing powerhouse of crackling, grinding noise and hum, that swells up like a dynamo crossed with a giant lizard. Woe betide the man who stands in the path of this behemoth. Most unsettling of all is the quiet assurance with which it stalks the globe, gazing down at us with lofty disdain. Extremely enjoyable maximal non-specific drone, controlled noise, and tasty static buzz pours forth from this fountain of plenty. Like the quince fruit, it’s a pulpy sweet mess which you can’t wait to turn into paste and spread on a slice of toast. On Trois Conseillers (CADUC CA26), Olive adds his magnetic pickups to the work of Pascal Battus and Anne-F Jacques, two improvisers who are renowned experts in the use of mechanical rotating surfaces and motors to produce rumbling groans. Both Battus and Jacques are regulars in these pages and we always love to hear them grind the meat into a pink juicy smear. It’s surprising they haven’t worked together before, come to think of it, but perhaps the global butcher’s shop isn’t big enough for the pair of these bone-shattering types. When these amplified and acoustic millstones of truth are combined with Tim Olive’s whiney basket of wasps and mosquitoes, the results are quietly spectacular, like watching a damp fireworks display upside down on the moon through sunglasses. I especially like it when we find ourselves spelunking a chasm of volcanic rock, as we do on track two, and the foothold on these treacherous surfaces is tenuous at best. The best improvised music should inculcate a certain sense of danger in the listener. I have no idea why the players call themselves “advisers” in the title, unless they’re running a commercial legal consultancy on the side. If we actually followed the “conseils” of these ambiguous musical statements, I have no idea where we’d end up, but the prospect is an exciting one.